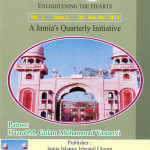 Akkalkuwa (Maharashtra): The Jamia Islamia Ishaatul Islam here has launched a quarterly journal ‘The Light’. Its first issue for October-December 2014 period has been received at Islamic Voice. Mr. M. Shamsul Huda Qasmi is the editor while Hazrat M. Gulam Mohammed Vastanvi is the patron. Priced at Rs. 25 for each copy, the magazine can be subscribed for Rs. 100 for a year. The 48-page magazine carries articles on religious topics. Jamia Islamia is a progressive institution combining madrassa as well as secular syllabus. The Jamia runs an engineering college, a medical college, a Unani Tibb college, a pharmacy college, a polytechnic, a teacher’s training college, schools from primary to higher secondary stage, and runs a hospital and an orphanage.
Editor Qasmi said the magazine is being launched with the mission of taking the message of Islam to the masses.
To get a copy contact: Editor, The Light, Jamia Islamia Ishaatul Uloom, Akkalkuwa, Nandurbar district, PIN: 425415, Ph: 02567-252256, email: [email protected]