The elegant edifice in Anjumanabad campus has currently 13,000 sq. ft. area in the ground and the first floor with scope for further expansion 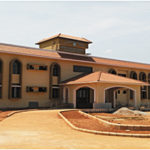 The Jukaku Shamsuddin Memorial Administrative Building and S. M. Yahya Memorial PG Block were commissioned here on July 17 in the premises of Anjuman Group of Institutions. The inauguration took place at the hands of Mr. R. V. Deshpande, Minister for Higher Education. The Anjuman Hami e Muslimeen, Bhatkal which runs a string of educational institutions in Bhatkal, dedicated its newly-built administrative office building to the memory of Jukaku Shamsuddin, who served as the general secretary of the Anjuman between 1938 and 1958. The elegant edifice in Anjumanabad campus has currently 13,000 sq. ft. area in the ground and the first floor with scope for further expansion. It was designed by Muzammil Design Studios and constructed by Thomas and Sons. The construction was funded by sons and daughters of Shamsuddin, settled in different parts of India, the Middle East and the US. The complex will also have offices for all the office-bearers of the Anjuman. The office complex will serve as an enduring tribute to the illuminating legacy of the great soul who worked tirelessly for the people of the region. The function was presided over by Jukaku Abdur Raheem, son of late Mr. Shamsuddin.
A book authored by Mr. Aftab Kola, a businessman from Mangalore, chronicling the life and achievement of Mr. Shamsuddin was also launched on the occasion. Shamsuddin sab was a minister in the Mysore Government headed by chief minister Nijalingappa and initiated development programmes to set up Sharavathy Power Station which became the major power supplying house for the state in the 1950s. Thanks to the power station, electricity reached the rural homes in the area triggering economic development. He represented the Honnavar constituency first in legislative assembly of Bombay Presidency and later in the Mysore Legislative Assembly. An advocate, Jukaku Shamuddin was a pious man who initiated several programmes for the educational and industrial development of the region. He brought up six daughters and four sons who received modern education and took up employment in Dubai, Saudi Arabia and the United States.