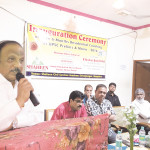 Bengaluru: The Shaheen Civil Services Academy started its coaching on December 21 at its Armstrong Road campus in Shivajinagar locality. The Academy has selected 50 students for the purpose. The candidates represent states from Kerala to Manipur and Jammu and Kashmir.
The candidates were selected from among a thousand students who had applied for the coaching and sat for an entrance test in 40 different centres across the country. About 130 students were selected for the interview and called for interviews at Bengaluru, Delhi and Guwahati.
The coaching was inaugurated by Karnataka Minister for Urban Infrastructure Mr. R. Roshan Baig. Mr. Baig exhorted the student to excel in studies and preparation for the civil services competitive exam. He asked them not to be content with small successes in life and raise their expectation high enough to reach the pinnacle.
Mr. Abdul Qadeer, Secretary, Shaheen Group of Institutions, said the Academy while providing coaching would also attempt to cultivate bonhomie and cordiality between students from various communities. He asked the students to retain sharp focus on studies and preparation.
Mr. Abdus Subhan, programme coordinator told Islamic Voice that the Academic would provide 650 hours of coaching. The Academy will be receiving some portion of the expenses through grants from the Ministry of Minority Affairs. n
(By A Staff Writer)