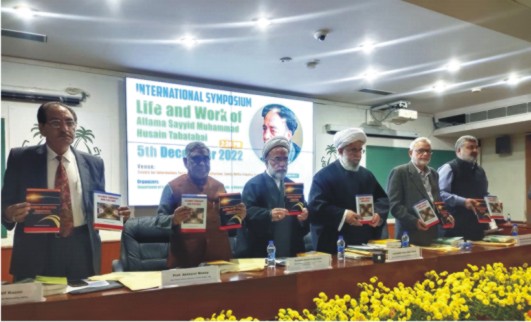 ‘Allama prepares a synthesis of all streams of Islamic thought’

New Delhi: Ayatullah Reza Ramazani, secretary general of the Ahlul Bayt (A.S.) World Assembly, based in Tehran, gave the keynote address at the international symposium on the life and work of eminent Islamic scholar Allama Sayyid Muhammad Husayn Tabatabai held at Jamia Millia Islamia here. Academic and literary figures from Iran and India, as well as researchers, professors, students from various universities, religious and cultural intellectuals, and social scientists, participated in the seminar.

In his address, Iranian scholar Ayatullah Ramazani noted that Allama Tabatabai prepared a synthesis of all streams of Islamic thought while emphasizing the application of ethical values in daily life for the achievement of peace and tranquility.

He stated that the 20th-century scholar believed that if one “follows and implements the divine teaching on ethics he can acquire peace of mind” while summarising the ideas and writings of the Islamic thinker.

Millions of people desiring to embark on a spiritual journey in order to uncover themselves” and comprehend the outer world have been profoundly inspired by Allama Tabatabai’s ideas and works, which have enlightened intellectuals of all stripes, he added. The Iranian Islamic scholar, however, was not only a man of high moral character and sharp intellect; he also had a profound knowledge of Western hegemony and post-colonial imperialism.