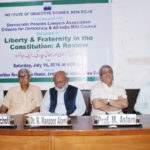 New Delhi: The Institute of Objective Studies organised a discussion on “Liberty and Fraternity in the Constitution: A Review” at Nehru House, Jamia Millia Islamia in association with the Democratic People’s Lawyer Association (DPLA), Citizens For Democracy (CFD) and the All India Milli Council (AIMC). Introducing the theme, Prof. M. Afzal Wani, Professor, School of Law and Legal Studies, G. G. Singh Indraprastha University and Asst. Secretary General, IOS stressed that it was fraternity that was cardinal for integrating humanity. Vice-Chancellor, Indira Gandhi National Open University, Prof. M. Aslam, laid emphasis on the need for inter-community dialogue between Muslims, Christians and among other minorities. He also suggested inter-community dialogue between Muslims and the majority community in order to reach a consensus on broader issues confronting the nation. In his presidential remarks, the Chairman of the IOS, Dr M. Manzoor Alam, exhorted the youth to come up and define their role in the present context. Echoing views of Prof. Aslam, he said that the All India Milli Council had been organising inter-community dialogues. In order to take the course of inter-community dialogue forward, he stated that a two-day programme would be organised in Gaya (Bihar) on September 24 and 25, 2016 in collaboration with the Magadh University, Bodhgaya. (For more details contact, [email protected])