Islamic Voice 0 February, 2018 12:00 am
Deputy Grand Imam of Al-Azhar Issues Fatwa against Child Marriage
Sir Syed Bicentenary Seminar – Call to Give up Conformism, Orthodoxy
Hate Crimes against Muslims in Britain up by 593%

Jurists, activists and scholars call for unity among faiths against communal forces. 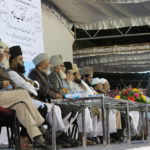 Bengaluru: “Justice should prevail at all costs. Justice and equality are prerequisites for the unity. Muslims have inhabited India for over a millennium and the world has been a witness to our treatment of them. A small section of vested interests have become powerful today and are hell-bent on maligning their image and projecting them as enemies of the nation. They are pursuing the agenda of controlling the entire economy through political power,” said Mr. Justice S. Rajendra Babu, former Chief Justice of India, while speaking at a symposium organised by the Jamaat e Islami Hind as part of a 4-day conclave at the Quddoos Sahib Eidgah in the city on January 18-21.

Justice and Equality
Justice Babu stressed the unity among Hindus and Muslims and held it as key to the integrity of the nation. “India failed to establish equality among people as caste system persists even today. Our Creator has given guidance through the Holy Quran to establish Justice and equality in the world. Islam established justice and equality before the modern world started thinking of it. We do not interfere in other religions, because our tenets bind us to guide the humanity justly and to treat all humans as one family who descended from Adam and Eve. The objective of Islam is the welfare of the nation and the world,” he added.
The symposium was themed as ‘Equality and Justice in India’. Addressing the gathering, Maulana Jalaluddin Umri, President of the Jamaat e Islami said, “We follow the word of Allah and the way of Prophet Muhammad. On this basis, all Muslims should unite and serve the humanity. We should follow the path of Allah and should not be afraid of the current challenges and threat. We should become more useful to the country by equipping ourselves with education and thinking. India is aspiring to become a world leader, which is not possible without providing justice to its minorities.”
General Secretary of Karnataka Komu Souharda Vedike, K. L. Ashok while speaking at a panel discussion said, “Attempts to divide India by the communal forces will not succeed because the camaraderie and harmony is embedded in the very soul of India. The panel was diverse too including author and human rights activist Muhammad Aamir Khan, New Delhi (who was detained for 14 years, and acquitted by the court), JIH National Vice president Sadathullah Hussaini, SIO National Secretary Thouseef Ahmad, Dr. H.V. Vasu from Karnataka Jana Shakti, and Congress MLC, Rizwan Arshad, MLC.

Morality and Character
Earlier, addressing the ‘Journalists’ Session’, Maulana Umri said, “Those who are thinking of changing the Constitution of the country were totally being misled by their leaders. It cannot be changed. Constitution is the binding force that keeps the country together; if Constitution is tampered with, there will be no other force that can unite India and keep its sovereignty intact. Politics should be governed by the morality and character.”
Jamaat Central Secretary, Waliullah Sayeedi speaking on the occasion said, “The Muslims of India are facing many problems. The Government’s interference in Muslim’s Personal Law on the one hand and the vigilantes’ effort to curb the freedom to profess and practice the religion were ploys to entangle the 200 million Indian Muslims into routine issues of Madrassa, Masjid, Azaan and other sectarian issues. The growing cooperation between Israel and Indian communal forces is a threat. Majority of non-Muslim intellectuals have protested against bonhomie with a State that has least regard for the international norms, peace and UN’s resolutions.”
Civil Rights Activist Mrs. Teesta Setalvad’s video message was also played to the audience wherein she condemned the atrocities on minorities and the growing lawlessness in the country. She urged all the peace-loving people to forge unity and promote peaceful coexistence. Rizwan Arshad, Congress MLC, asked the Muslims to reflect upon their own plight, as to what they have done collectively to redress their own grievances. He said, the Muslims were an unorganised lot. Collective priorities of the community must be the focus. The Dalits are progressing by setting their priorities right.” He urged the community to prioritize issues, build institutions, and invest in human resources.
The conclave hosted special sessions for teachers, doctors, women, girl students, youth, lawyers, journalists, professionals and its own cadres. Several thousand of women packed the improvised auditorium to listen to the Jamaat leaders. It also hosted a Mushaira, a literary session for writers, ulema and even auto-rickshaw drivers. A Light and Sound show on the History of Muslims left a deep impact on the audience. A book fair and a session for the differently-abled people too was part of the conclave.