A TechCamp held in Bengaluru imparted skills to use social media to counter hate campaigns. 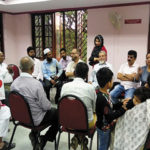 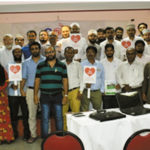 Bengaluru: A Technology Camp organized here by COVA in collaboration with several local organizations provided training to youths and activists belonging to various faiths in using social media. The camp was organized at United Theological College. Around 40 participants from Karnataka, Tamil Nadu, Telengana, Andhra Pradesh, Puducherry, and Kerala gathered for this Camp.
Four trainers of COFI (Countering Online Fanatic Indoctrination) Network, formed in Hyderabad in November 2016, handled sessions in generating content, its curation, developing messages for WhatsApp, Google search, podcasting, blogging, developing websites, mass e-mailing, Facebook pages and content for Twitter.
Welcoming the participants, Mr. Maqbool Siraj said there was a lot of bigotry in the air. He said due to communication environment expanding limitlessly, multiple biases prejudices were colliding to generate a lot of hate and antipathy. He said the Planet Earth was the only planet known to be habitable for the human beings and it should not turn inhospitable for them. He said things said in a particular context are likely to be misread or misconstrued in another part of the earth. He suggested that youth should develop a language of love and compassion for all and should not be indoctrinated by merchants of hate who may even occupy seats of power for some time.
COVA General Secretary, Mr. Mazher Hussain said, the online media is being increasingly used to spread misinformation to cause disaffection between different communities across the world, especially in the Asian countries. There are many persons from youth, civil society, journalism, religious groups and computer professionals etc who are concerned by this growing phenomenon of misuse of social media spaces for fanatic indoctrination, but are unable to respond appropriately due to their technical limitations in using social media and absence of a platform for action.

COFI Network
Mr. Hussain said, under the theme of “Countering Online Radicalisation in Digital Age”, COFI Networks program was launched through a TechCamp jointly organised from November 27 to 29, 2016 by COVA and US Consulate General, Hyderabad in association with the Bureau of International Information Programs of The U.S. State Department. As a follow up, COFI Networks are being initiated in five countries of South Asia and four countries of South East Asia viz. Bangladesh, India, Maldives, Pakistan, Sri Lanka, Indonesia, Malaysia, Philippines and Singapore by conducting 2-day TechCamps and one-day BootCamps.

Challenge Statements
Armed with orientation to various social media platforms and equipped with knowledge of developing apps, tools and strategies for informed usage of social media, the participants framed the following Challenge Statements to identify and express the problems faced by them in their fields of work that technology might be able to address. These were: 1- How to counter character assassination of a community or an individual or celebrity on Social Media. 2- How to counter a negative propaganda being propagated on a large scale in conventional and social media against Islam and Muslims. 3- To create a platform where one can get information about the NGOs, Funding (Scholarships, grants) and fellowship programs related to Education Sector. 4- How to help followers of a religion to understand their own religion, so that they don’t face misunderstandings about their religion as is commonly seen. 5- Stories of Prophets conveyed in an interesting manner and how they interacted with other communities. Intention is to address the misconception about religious harmony. 6- How to counter propagation of fake news that is dominating the social media. 7- Create news platform for college students to spread positive news through videos and articles.

Prototypes
The participants prepared prototypes of blogs, websites, portals, Facebook pages and Apps to address the challenges and showcased them on the screen in the concluding session of the TechCamp.

Expertise
Four expert trainers Venkataraman R., Harish Kotra, Nasheeda Anjum, Puneet Murthika handled the various sessions and interacted with the participants. They practically demonstrated as to how fake news could be exposed, how positive news and facts could be put on the web, how to access existing websites for scholarships and career information, write stories about communal camaraderie and harmony among various communities, gathering and putting out positive narratives from religious leaders promoting moderation etc.