The SKF management said religion has nothing to do with sports and both Shaista and Aaqib have been picked to lead their teams on the basis of their merit. 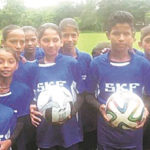 Pune: Two Muslim kids from the slums of Pimpri-Chinchwad area of Pune Metropolitan City in Maharashtra are making the community and the country proud as they prepare to leave for Sweden to take part in Gothia Cup, touted as the ‘Mini Football World Cup’, The Indian Express reported. Both of them are not just going as players, but have been selected to lead their respective under-12 teams. Incidentally, most of the team members are from the slums of Pimpri-Chinchwad. Shaista Mohammad Patel 12 year-old and Aaqib Ansari are studying in Class VII and VI in municipal schools. Both the youngsters have been selected as captains by the selection committee of SKF Sports Education Programme, which is sending the 24-member team for Gothia Cup to be held at Gothen-burb in Sweden from July 17-23. “We have been sending our team from 2007 to participate in the tournament described as the mini football World Cup in view of the participation of a large number of teams from across the world,” said Shrikant Savangikar Director of Business Excellence, Quality and Sustainability, SKF. Shaista says when she told her parents that she has been selected as the captain, they were highly excited. “My father said go ahead and do well for the country,” she beams. Aaqib said his family was equally delighted. Activist Ikhlas Shaikh said, “It is a moment of pride for the community that two kids, especially from the poor community, are leading their sides on the football field at the international level. Intellectuals and well-to-do people from within the community should also come forward and encourage children at a time when some forces are bent on taking them on the wrong path.” The SKF management said religion has nothing to do with sports and both Shaista and Aaqib have been picked to lead their teams on the basis of their merit. “Both are excellent players and have shown leadership qualities and hence were selected to lead the team,” said an SKF member. All players in the two teams are slum-dwellers who are picked by a special bus on every alternate day from their homes for training on the SKF grounds and dropped back two hours later. Savangikar said of the 24 players, 18 are from the slums of Pimpri-Chinchwad, while the other six are from the slums of Ahmedabad. “The Sports Education Programme is our company’s holistic development programme for children belonging to the economically weaker sections of society. Our objective is to bring a new dawn in the lives of these poor children and encourage sports in them, primarily football,” Savangikar said. SKF has set up a sports academy for encouraging children from the underprivileged sections of society to take to sports. “The academy is equipped with modern amenities to train young footballers through audio-visuals. We also provide the children healthy and nutritious food recommended by a sports nutritionist,” Savangikar added. Vijay Chaudhary, head of the company’s communications department, said the Pune programme is implemented with the help of Pune Football Club and the Ahmedabad programme through Kahani Sports Academy. “There are at least 20 teams from India which participate in different age groups in the event,” he added. (siasat.com.news)