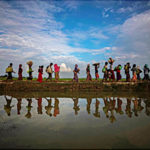 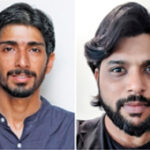 A sun-burnt woman sinks to her knees on the shore, fatigued and forlorn. In the distance, a group of men unload the meagre belongings that they have carried with them in a small boat as they have made their way across the Bay of Bengal from their homes in Myanmar to the safety of Bangladesh.
This striking picture is the work of Danish Siddiqui, one of two Indians in the seven-member Reuters team that won the 2018 Pulitzer Prize for feature photography for their series documenting the violence faced by Myanmar’s minority Rohingya community and their mass exodus to Bangladesh starting from August 2017. The prestigious awards, given out by Columbia University in New York, were announced last month.
“A photo should draw people and tell them the whole story without being loud,” Siddiqui told Scroll.in. “You can see the helplessness and the exhaustion of the woman, paired with the action that is happening in the background with the smoke. This was the frame I wanted to show the world.”
Adnan Abidi was the other Indian in the team that won the prize. The other members of the Reuters team were Mohammad Ponir Hossain, Soe Zeya Tun, Hannah McKay, Damir Sagolj and Cathal McNaughton.
The Rohingyas, who are mainly Muslim, have been fleeing their homes in Rakhine state for several years, alleging that they are being discriminated against by the government of Buddhist-majority Myanmar. Myanmar maintains that the Rohingyas are illegal migrants from neighbouring Bangladesh.
Siddiqui was one of the first international photographers to be sent to the field at the outset of the crisis. The photographer had been on vacation in August when he saw the crisis unfold on the news channels. “I told my editors that I wanted to cover the story and within 48 hours I was on the first flight from Mumbai to Dhaka and then to Cox’s Bazar in Bangladesh,” Siddiqui said. “Since I was one of the first wave of journalists to land up there, there weren’t many restrictions, and I was permitted to even click pictures in no man’s land.”

Finding New Eyes
Siddiqui hopes that the Pulitzer Prize will attract new attention to the tragedy. “I just hope that this award makes a positive difference in the lives of these refugees,” he said. “I hope through these pictures and recognition, more people would get to know about the problem. Because it is not over yet. The crisis is not over yet. These makeshift camps are built on muddy hills which are prone to landslides when the heavy monsoon starts.”
Siddiqui and Abidi are alumni from the AJK Mass Communication Research Centre of the Jamia Millia Islamia.
(Source: Extracted from Scroll.in)