22 Students Trained in a 6-Month Course 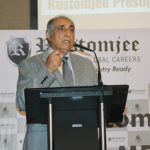 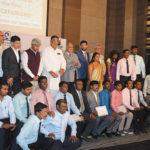 Bengaluru: The convocation of the first batch of student-trainees from the Rustomjee Prestige Vocational Education and Training Centre was held here on September 6. Twenty two students were presented the certificates on completion of the six-month training course in various trades related to construction industry and automobile and healthcare and hospitality sectors. This is the first such school in South India to train basic technicians for the above mentioned sectors modeled after a centre being run in Mumbai by Rustomjee Constructions.
The Centre which began its operations in February this year provided training programmes in construction, automobile, hospitality, facility service management and healthcare. The Centre came up with the Mumbai-based Rustomjee Academy for Global Careers and Prestige Group from Bengaluru, joining hands to fulfill the growing need of skilled manpower across construction and other related sectors. CREDAI collaborated with the Centre to ensure that the industry standards and benchmarks were maintained.
Prestige Group Chairman Mr. Irfan Razack told the media persons that the initiative was part of Prime Minister Mr. Narendra Modi’s Skill India Mission. He said having been in construction business for well over three decades, he found a large vacuum of skilled workers such as brick-layers, carpenters, H-VAC technicians, tile-layers, fire fighting personnel. “Training as skilled personnel would impart self-pride in the humble workers employed by the industry. And as for the building industry, how could builders and developers provide a five-year warranty on construction as required under the RERA which has just kicked in,” he said.
Mr. Razack said the workforce in the construction and real estate sector will touch the figure of 76 million by 2,022, according to the National Skill Development Corporation’s (NSDC) report on Human Resource and Skill Requirement published in 2013-14. Of these, 97% of workers between the age of 15 and 65 are likely to have no training before they start working. This is indicated by the findings of the National Sample Survey Organisation. Further on a survey by the Housing.com in 2015 says that only 4% of India’s workforce is skilled as compared to 96% in South Korea, 80% in Japan, 74% in Germany, 68% in the United Kingdom and 45% in China. These should set an alarm for all of us as we aspire to emerge as an economic powerhouse. Hence there is an urgent need to take measures to start addressing this situation immediately.
According to Mr. Nitesh Poorey, Head of the Rustomjee Prestige Training Centre, the courses were divided into three parts viz, theoretical, practical and field trips for demonstration. The Centre will organize longer duration certificate and diploma courses once campus and attendant facilities come up in the city. The eligibility criteria is 10th standard pass. There is no entrance test for the courses, but an aptitude test is conducted to determine the sector that would suit the candidate. However, the first batch consisted of those who are already working in the construction companies. He informed that fees were borne by the sponsoring companies. According to Mr. Razack, the objective behind the training Centre is to touch as many people as possible and to benefit the builders’ fraternity as a whole.