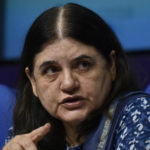 School students must be taught from six major religious texts “ including the Gita, Quran and Bible “ to inculcate tolerance for different faiths, Union women and child development (WCD) minister Maneka Gandhi has said. “These days, there is a lot of religion-based tension. One of the reasons is that children don’t know enough of other religions, and operate on blind hatred. Teaching from scriptures of major religions such as Hinduism, Jainism, Buddhism, Sikhism and Islam will help dispel religious stereotypes that students develop at a young age,” Gandhi said.
The Union minister, who raised the matter at the Central Advisory Board of Education meeting, now plans to ask the human resource development (HRD) ministry to conduct classes on the six religious scriptures at least twice a week. “How many of us have read our religious scriptures? I have read the Quran. How many of us know that Prophet Mohammed was anti-war? We were taught moral science during our school days, but it is not done anymore,” Gandhi said.
(Extracted from http://www.hindustantimes.com)