Islamic Voice 0 May, 2015 12:00 am
I wear Hijab, I am Liberated
Women’s Mosques in China
Safa Al Hashem – Kuwait’s Lone Women’s Voice in Parliament 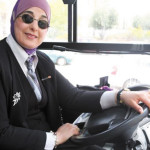 Suhaila Fadila says she always liked to drive. ‘I’m a devout Muslim, but I didn’t need permission from anyone in order to accept the job.’
Even in 2015 Israel, female bus drivers are a rare sight “ not to mention female Arab bus drivers. And yet there is one: Suhaila Fadila, 44, a mother of four, who has been driving for the past three years. A resident of the town of Tira in the Galilee Triangle, Fadila is a devout Muslim who wears a hijab, makes sure to dress modestly and drives a Metropoline bus in Kfar Sava. The Metropoline company provides service in Be’er Sheva and Tel Aviv, along with other destinations in the southern and central parts of the country.
“I’m very familiar with that city from the days when I worked with my husband in his driving school,” she says. “I’ve always liked to drive, and when my husband decided to get a bus driver’s license I asked “ Why not me?”
Together with her husband, Fadila passed the tests and began a long training period that included both theoretical and practical aspects of the profession, her husband’s presence enabling her to continue to study, a lone woman among men. Her husband went on to teach driving, and meanwhile Fadila was hired as a rank-and-file driver “ five days a week, seven hours a day.
“They are very willing to compromise,” says Fadila of her employers. “I can’t work on Fridays, so they didn’t insist, and when it comes to clothing they are meticulous only about the colours “ black and purple. So my clothes are black, and my hijab is purple.” Fadila’s job is even more surprising in the light of the Central Bureau of Statistics data showing that the vast majority of Muslim women in Israel do not work at all.
To arrive at work on time, at precisely 6:45 A.M., Fadila rises every morning at 5 A.M., prays, gets organized and leaves the house at 6. Her husband wakes up their 14-year-old son (their three other sons are already adults and have moved out) and sends him off to school.
Fadila explains that everyone in her surroundings accepts the fact that she is working as a bus driver, and adds that she was not required to consult any religious authority before starting out.