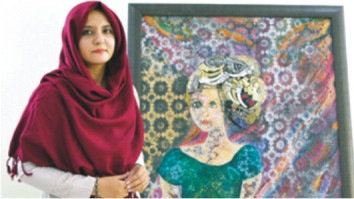 QUETTA: When Barishna Reki was thinking of ideas for her senior thesis as she completed a fine arts degree in 2019, she wanted to work on a project that would help transform her passion for painting into a financially viable one day career.

Reki, now 25, who hails from the remote town of Mashkail in southwestern Balochistan province and graduated from Sardar Bahadur Khan Women’s University two years ago, came up with the idea of using traditional Baloch jewelry to add an extra sparkle to her canvases.

The project that she submitted as part of her coursework has now become her life’s work. Reki’s creations, which combine painting and jewelry like a sumptuous, gilded embrace in a Gustav Klimt painting, have attracted much attention on social media.

What’s more, she has sold four pieces, one of them for 175,000 rupees ($1,000) to leading Pakistani actress Zeba Bakhtiar. Another creation is on sale for 275,000 rupees at a mall in Quetta, the capital of Balochistan.

Muhammad Asif Kasi, a painter and sculptor in Balochistan with more than 24 years’ experience, said Reki’s craft was “rare.”

“Instead of using more colors on canvas, Barishna has used jewelry, which is an exclusive idea,” Kasi said, adding that he hoped that Reki would keep pursuing her passion and inspire other women in Balochistan to do so as well.