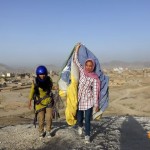 Kabul: Zakia Mohammadi, a woman in Afghanistan’s first national paragliding team, waited on a hilltop on the outskirts of Kabul for a wind to lift her craft into the sky, as dozens of watching teenagers clapped and cheered. She is one of a group of young Afghans taking to the skies in a country, where military helicopters and surveillance balloons are a far more familiar sight. “When I went up to the sky, I thought I was a bird which had just been freed from a cage,” said Mohammadi, one of two women in the newly established team of 15 that includes two trainers. “When women see me they don’t believe that an Afghan woman can do this,” said Leeda Ozori, the other woman in the team. “The situation is not good, there is no security, but I am brave and I can do it.” During the rule of the militant Taliban in the 1990s, Afghan women were kept out of schools, universities and public life. They could not leave their homes unless accompanied by a male family member. “When we first came here, children were pelting us with stones,” paragliding trainer Mehran Rahbari said. “But later, when they found out that we were coming here for sports, they stopped throwing stones at us. Now they love us.”
“We cannot go anywhere outside Kabul,” said Iranian trainer Rahbari. “We are afraid if we go out and get attacked, one bullet can end all our efforts.” “Our idea is to show to the world that Afghan women, although living in war and insecurity, have the ability to improve and become developed,” said Mohammadi.
[extracted from http://spanishnewstoday.com/womens-afghan-paragliding-team-soar-through-kabuls-skies_26859-a.html]