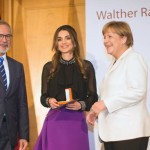 Jordan’s Queen Rania received the Walther Rathenau Prize in recognition of her work as an outstanding advocate for peace and understanding between East and West. She was presented the award by German Chancellor, Angela Merkel. The ceremony was held at the Federal Foreign Office in Berlin. The Queen conveyed the pressing need for empathy and compassion, or “basic human decency”, to awaken on a global level in response to the growing crisis of refugees and unnecessary suffering that prevails around the world today. Queen Rania voiced appreciation of the people of Germany for their humanitarian contributions and relief efforts for those in need, particularly Syrian refugees. She also described the considerable effort that Jordan has committed to of receiving 1.4 million Syrians in Jordan, amounting to 20 per cent of the population.