Islamic Voice 0 May, 2014 12:00 am
My Hijab Liberates Me from Your Oppressive Standards for Women
Two Women Shahr Qazis in UP
Indonesian Islamic Women’s Group Help Transgender School

Dr. Mehrunnisa Mohammed Sharif Desai overcame many hurdles in life and became a lecturer, apart from dynamically leading an organization for women in Ahmedabad. 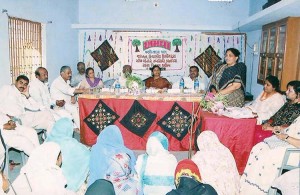 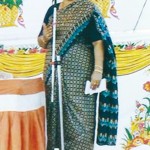 By Ilyas Khan Pathan and Rehan Ansari
Dr. Mehrunnisa Mohammed Sharif Desai is a lecturer in L J Commerce College, Vasturapura, Ahmedabad and the founder President of Association of Muslim Women Associations (AMWA), Juhapura, Ahmedabad. Born to a caring mother and father who was in government service, Dr. Mehrunnisa has seen many faces of life. She remembers her childhood days when they could not have sufficient food to eat, but due to her passion for reading and her father’s support, she overcame all hurdles to become a lecturer.
Dr. Mehrunnisa said, “My father was an employee in Gramsewa and his salary was not enough for the family of 8 people. My mother used to stitch readymade clothes for sale and also had chickens to sell their eggs for some additional income.” Since her father had to keep travelling all over Gujarat because of transfers, they had to find another business every time at some new place. In that scenario, it was difficult for her to study, but the support of her father pushed her ahead. She did her graduation, masters and then Ph.D. and became a college teacher. She had two brothers, one older to her and one younger to her and were studying in a school.
“When I reached the high school, most of my friends started getting married one by one and my father also was pressurized,” she says. That time was very crucial for her, but her father overcame the pressure and allowed her to study further.
After getting married to Mohammed Sharif Desai, now a Deputy Manager in the State Bank of India, she had a peaceful life, but was always passionate about working for Muslim women. She said, “We lived in Juhapura, where 90% of the population is Muslim and their plight was troubling me, but I had no time to do anything much about it.” However, one day she was moved so much emotionally by their troubles, that she went out to do social service and formed AMWA in 1989, when Kokilaben Vyas, former Health Minister visited her college. During the discussion, Kokilaben told her, “Muslim women do have many problems, but no one from your community comes up to help them.” Dr. Mehrunnisa then discussed it with her colleagues in the college to form AMWA and since she was the youngest among them, so everybody elected her as the President. She said, “We decided not to ask for funds from others because it has many strings attached to it and the donors like to dictate the terms.”
They used spare sewing machines in their home and started teaching sewing to other women so that they can earn their livelihood.
Just after Dr. Mehrunnisa and her husband came back from Hajj in 2002, they faced the Gujarat carnage and her organisation, AMWA immediately started relief camps in Juhapura, Shahpur, and Sonal. She said, “Besides providing them shelters we trained them for small business and provided them financial help to start their own business.” She added, “We are proud that we could bring happiness back to nearly 400 families in Gujarat.” Dr. Mehrunnisa, who did her Ph.D. on Rights of Women in Islam, said, “the world is changing and people are trying to understand women’s role in Islam now.’ She believes that Islam has provided women the right of education, right of employment and other social rights equal to their male counterparts it is the Muslims who now have to follow it.
Dr. Mehrunnisa’s message for the society is “Read and Lead. Educating a girl is the best gift for the whole family of the future.”
(Source: Twocircles.net special series-women of inspiration)