It wasnot a smooth ride for Salva Fatima, as she had to overcome many odds to attain her life’s ambition. Salva comes from the poverty-stricken neighbourhood of Sultan Shahi in the old city of Hyderabad. 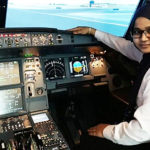 Hyderabad: “I want to become a pilot.” When she instinctively answered a question at an event over a decade ago, the dream of a humble bakery worker’s daughter had started growing wings. SyedaSalva Fatima is now all set to join an airline and is one of the four Muslim women in India who hold a Commercial Pilot’s Licence (CPL).Fresh from the multi-engine training in New Zealand and type-rating in Bahrain, this Hyderabad woman is waiting for endorsement from the Director General of Civil Aviation (DGCA) which will enable her to fly the Airbus A320.
It was, however, not a smooth ride as she had to overcome many odds to attain her life’s ambition. The daughter of a bakery worker, Salva comes from the poverty-stricken neighbourhood of Sultan Shahi in the old city of Hyderabad.What makes Salva’s story stand out is her lower middle class background and the fact that she wore a “hijab” (head scarf) during the entire course of training in India and abroad.”I had it all the time on my head and wore it over the uniform. There was never a problem because of the hijab,” Fatima told IANS.”Where there is will, there is a way,” says Salva, who calls for removing misconceptions that “hijab” is a hurdle in pursuing careers like aviation.”It’s your education and ability which help you, be it aviation or any other profession. Nothing else matters. You have to prove that you are capable of doing what you are supposed to do.”From her school days, she used to collect articles about the aviation industry and pictures of different aircraft, but people laughed at her dream. Her parents suggested that she prepare herself for engineering. After passing 12th standard, she enrolled for coaching conducted by Urdu daily Siasat for the engineering entrance examination.At a programme during her coaching, Zahid Ali Khan, editor of Siasat, asked her what she wanted to become. Prompt came the reply “ “Pilot”. Khan was surprised by her confidence.”If I had not uttered the word “pilot”, I wouldn’t have been here,” she said recalling the incident which became a launching pad for her career.
Khan, along with his friends and philanthropists, decided to give wings to her dreams and she was enrolled in the Andhra Pradesh Aviation Academy in 2007.”I failed thrice in navigation papers. I used to get de-motivated, but Zahid Sir kept encouraging me. He used to tell me that failure is the next step towards success.”Five years later, she completed her training at the Aviation Academy, logging 200 hours of flying in the Cessna 152 aircraft and 123 hours of solo flight.After obtaining a CPL in 2013, she found that she needed huge money to go for multi-engine training and type-rating to be able to fly big airplanes.She was then 24 and her parents asked her to get married. “I didn’t have any other option. I was not sure how the funds will come.”She was in four months of her pregnancy when the Telangana government announced financial assistance of Rs 36 lakh for her multi-engine training and type-rating. “My daughter was lucky for me,” she said with a big smile looking at her daughter, playing in the arms of her father who works at a two-wheeler showroom.When she delivered the baby, people asked her if she would still pursue the career in aviation. “I told myself I spent such a long time to achieve the goal, why should I step back? I need to move ahead.”After waiting for one year, she joined theTelangana Aviation Academy for multi-engine training, but the aircraft was not available there. When the government transferred the money to GMR Aviation Academy and she was about to begin the training, the aircraft was grounded due to an accident.”Some or the other problem kept cropping up, but I didn’t give up and appealed to the government to send me abroad for training.”In New Zealand, she flew a multi-engine aircraft for 15 hours and also trained on simulator for 10 hours. At Gulf Aviation Academy in Bahrain, she did the type-rating on Airbus. It was a 52-hour multi-function display training and 62 hours of training on a motion simulator, which gives the trainee a feeling of actually flying an aircraft.Salva has no preference for any airline and is open to joining any carrier that has an Airbus fleet. “I will join whichever airline first offers me a job.””Have a clear goal and positive thinking. Dedication and hard work don’t go waste,” is Salva’s message to girls with dreams like hers.The captain wants to give something back to society. She will spend part of her salary on the needy for their education, medical treatment or marriage.
(IANS) (www.siasat.com)