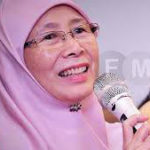 Putrajaya: Wan Azizah Wan Ismail’s childhood ambition was to become a doctor. Now that she is Malaysia’s most powerful female politician, she says her mission is to improve women’s rights. The 65-year-old made history recently when she was named Malaysia’s deputy prime minister. She is the first woman to hold the post, and one of only a handful of female politicians in high public office in Southeast Asia. Wan Azizah has vowed to push for greater women’s rights in a country where female representation in national legislatures is among the world’s lowest. Wan Azizah has also been tasked to head the ministry of women and family development. Trained as an eye surgeon, Wan Azizah was first thrust into politics after her husband, Anwar Ibrahim, was sacked as a deputy prime minister and jailed in 1998. She went on to lead an opposition front and mobilised support for his release. Campaigning on a platform of reform, Wan Azizah and the opposition alliance swept into power in the historic May 9 poll, heralding the first change of government since Malaysia gained independence from Britain in 1957.