Trolling by committed groups is aimed at shutting up liberal discussants. 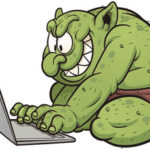 Trolling is to make a nasty, abusive comment about someone and some point in an on-going discussion on the Internet by a person who takes advantage of the anonymity of the medium and further masks his identity under pseudonyms. He may use several email IDs to instigate conflict, hostility or arguments in an online social community. Most frequently misused platform for trolling are You Tube, forums or chat rooms.
The Internet gives freedom to social media trolls to hunt down people, brands, actions, names, thoughts, and everything for that matter. Trolls often use inflammatory messages to provoke emotional responses out of people and their objective is fulfilled when a civil discussion is disrupted. There are committed groups who use trolling to shut up even the most sober writers. Remember late journalist Praful Bidwai who complained that committed groups would attack his writings on the Internet from so many IDs and names that he would feel frustrated in voicing his views. Nowadays the right wing Hindutva groups, Islamic extremists, Salafists and White supremacists have hired people to troll writers and authors known for their liberal views.

Fascist Strategy
A known fascist organization has set up three centres in India including Nagpur and Hyderabad for trolling writers and journalists who defend liberalism and oppose extremists. It is a 3-tier structure where every morning, they harvest such pieces from the media. At the second level they distribute these pieces to their appointed trolls. At the third level they start posting abusive comments and nasty attacks against such writings and columnists. Possibly, a single person will post 50 messages from 50 different IDs. The objective will be to demoralize the writers and to make it appear that his views were against popular trend. It is aimed at shutting him up and force him out of the business of writing or speaking.
But even decent people can engage in trolling once they experience the anonymity of the cyberspace. Some people who engage in trolling are supremacist in their behavior and feel that their religion and views are infallible and unchallengeable. Others who do it are simply intolerant of others’ views. But remain assured that some are even paid for trolling and harassing the participants in online discussions.

Ignoring
The most effective way of dealing with trolls is to ignore them. Trolls thrive on the attention they receive from users on public platform. Ignoring their comments and encouraging others to ignore them as well can prevent the trolling from escalating. Another way is to ask them if they would say the same nasty things if they met in person.
The Pew Research Center found that 73% of adult Internet users have witnessed some form of online harassment at least once. A poll conducted by Craig Newmark for Craigslist, along with Rad Campaign and Lincoln Park Strategies, found that minorities, women, millennials and Democrats experience online harassment the most. The study also found that 63% of respondents said they had experienced harassment on Facebook, which was substantially higher than any other online channel. Furthermore, 61% of participants knew the person who harassed them online.
Social media strategist, Kelly Hungerford says, “Engagement is what fuels a troll’s fire. My approach is to deem them invisible and give them the silent treatment. I don’t engage. This strategy has two advantages: It deprives them of their platform. A troll won’t stick around if they cannot get a rise out of their intended victim.
So far no effective technology has been developed to check trolls and filter offensive remarks. Perhaps Instagram has come out with some device which filters them on the basis of some offensive words. But it is still not very effective. If someone feels that a particular troll is extremely abusive, the victims should contact the mediator of the website who can block such IDs. If trolls take to intimidating or threatening safety of the individuals, the matter could be reported to Cyberpolice.
—————————————–
(Note: The content has been compiled on the basis of the discussions held at TechCamp held in Bengaluru by CofiNetwork.)