Islamic Voice 0 October, 2017 12:00 am
US Servility to Israeli Objectives
A Powerful Rebuttal of Atheists’ Claims
People of Other Faiths Acting as a Mirror

Sanjiv Bhatla’s book “Islam is Good, Muslims Should Follow It!!” serves as a very necessary reminder to get back to basics and to understand the Quran and Prophetic wisdom in their true spirit, which will help present-day Muslims tackle the troubles and tribulations in which they are trapped today. 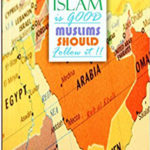 Stepping gingerly into my office after a heavy spell of rain the other day, I quietly surveyed the damage that the downpour had done to the files, papers, tables and chairs! I felt sad, I must confess. As my chattering mind went on and on about this and that, a little neat packet arrived by post. Lo and behold! It was a book with a fascinating title: “Islam is Good, Muslims Should Follow It!!” (the exclamation marks added to the mystery!) The book’s cover, in soft, pastel-shades, made it seem even more intriguing.
“Islam is Good, Muslims Should Follow It!” serves as a very necessary reminder to Muslims to understand and follow the Quran and Prophetic wisdom in their true spirit, which will help them tackle the many troubles and tribulations in which they are trapped today.
Author Sanjiv Bhatla, who lives in a small town near Mumbai, was born in 1953 in Mathura, and graduated in Electrical Engineering from I.I.T Kanpur in 1975. He quit his profession early to pursue a career in writing. So far, he has published two novels and four books of poems. His novel, Injustice was long listed for The Man Asian Literary Prize 2007. Bhatla founded Poetry Chronicle in 1989 and edited it for four years until 1993.
Based on intensive research, one core message that this book conveys is that one needs to make a clear distinction between Islam, on the one hand, and Muslims, on the other. Bhatla highlights many of the virtues of Islam, such as compassion, kindness, the dignity of women, and social equality, and at the same time, critiques Muslims for not practising these as they should, and for grossly misinterpreting the teachings of their faith. He provides readers with many precious nuggets of wisdom, from the Quran and the life of Prophet Muhammad, that serve as valuable eye-openers.
In the context of the contrast between Islamic teachings, on the one hand, and Muslim practice, on the other, which has resulted in Islam being invoked for purposes and projects that clearly violate Islamic teachings (and these are so common that they require no elaboration), Bhatla has a useful suggestion for Muslims to consider. He suggests that when faced with an issue, Muslims must deeply reflect on what the Prophet Muhammad would have done in the situation they are faced with, if he were with us at this moment. “Along with the guidance of the Quran and Prophet Muhammad’s Sunnah, today’s Islamic jurists should ask this question to themselves while dealing with a case in hand”, he writes. “If they can evoke the Prophet’s spirit of kindness and fair play, their judgments would match with the best in the world.”
“It stands to reason”, Bhatla further explains, “that if Islamic jurists had set the example of kindness and compassion as advocated by Islam, and additionally of tolerance and open mindedness as displayed by Prophet Muhammad himself, then a common Muslim too would have cultivated these qualities in his day-to-day conduct.” “As things stand”, Bhatla notes, “because of the Islamic jurists’ rigidity, a common Muslim walks around with a halo of intolerance hanging over his head. It surely puts him in a bad light in comparison to people from other faiths.”
“To love a religion is one thing,” Bhatla rightly explains in his concluding chapter, but “to be haughty about it is another. Muslims by and large do not seem to understand the difference.” “We only have to look around to see how Islam has been sullied by none other than its own aficionados, the modern day Muslims”, he continues. “And they alone can amend their ways to restore the glory and respect that Islam truly deserves”.
(For those like me, who might hear of the word
“ “”aficionado” “ for the first time,” DICTIONARY.COM informs us, it means “ “”an ardent devotee; fan, enthusiast”)
A true friend is not someone who will incessantly praise you. Rather, he or she is someone who will not hesitate to show you a mirror so that you can spot your flaws and set about remedying them for your own good. Sanjiv Bhatla’s book is a gift of that sort of very necessary mirror to Muslims so that they wake up, realize where they have gone wrong, understand the beautiful wisdom of the Quran and the true message embodied in the life of Prophet Muhammad in their true spirit, and implement it practically, so that they can lead peaceful, truly spiritual lives and spread peace and spirituality around to others, too.
While some readers may not agree with everything that the book says, several of its basic arguments are very useful and offer a refreshing perspective on Islam and Muslims.
(Sanjiv Bhatla’s book is available on https://www.amazon.in/Islam-good-Muslims-should-follow/dp/8191077795) www.amazon.in