Dreams of a Fallen Hero Retold 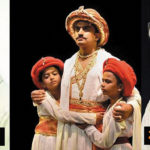 Gyanpeeth awardee Kannada writer Girish Karnad had written the Kannada play Tippuvina Kanasagalu (‘Dreams of Tipu Sultan’) in 1997 based on historical evidence of the Mysore ruler attempting to raise a front lined by Deccan rulers against the expanding British rule over India. The play was commissioned by the BBC Radio to commemorate 50th year of India’s independence. The play was even published by the Karnataka State Urdu Academy in the book titledTipu Sultan ke Khwaab in 2016.
Noted theatre personality Zafer Mohiuddin who had translated the play into Urdu, directed and stage the Hindustani version of the play in Chowdaiah Memorial Hall on July 13-14. Staged by Zafer’s Kathputliyaan theatre group, it was organized by the Karnataka Urdu Academy.
A hit with the audience, the Tipu Sultan ke Khwaab portrays the multifaceted life of the legendary warrior who laid down his life defending his capital Srirangapatnam on May 4, 1799. History bears testimony that this was an exceptional instance of a king laying down his life fighting along with ordinary soldiers.
Staged in the backdrop of a lot of maligning of his image and mud-slinging against his rule by the Sangh parivar, the play etches to broad relief syncretic religious practices and policies pursued under his reign. What better proof would be required than Purnaiah being his Dewan (prime minister) and Sriranganatha Temple (Srirangapatnam is named after the temple) receiving the official patronage. It was he who restored the Sharda Devi statue at the famous Sringeri shrine plundered by Maratha forces. He even sought advice of Hindu astrologers attached to temple for auspicious configuration of stars for launching important projects and craved for the blessings of Hindu divines. No communal stigma could be attached to his battles against the Peshwa rulers of Pune or Raja of Coorg. He similarly fought against the Nizams and the Nawabs of Arcot. The conflicts revolved round their stand vis-à-vis the British colonial rule and in an attempt to raise an alliance of the potentates ruling the major states in India.
Though Sultan spent considerable time on the horseback, the intervening periods between wars witnessed exchanges with delegations from alien lands on strengthening trade and strategic ties. A Chinese messenger is asked to provide know-how for rearing of silk. Wooden toy makers of Channapatna find encouragement. Correspondence with rulers of Oman, Turkey, Iran and France revealed the Mysore ruler’s interest to promote agriculture, horticulture, weapon industry, cultivation of new crops, and encouraging artisanship.
The script draws insights from the personal diary maintained by Tipu Sultan where he used to record his aspirations and initiatives to unite the Deccan rulers. His court chronicler Hussain Ali Kirmani who recorded his personal memoirs, later served under the British administration too.
Zafer’s rendering of dialogues in his Hindi-Urdu-Dakhani baritone, authentic costumes designed by G. S. Jayanti, music by a group over a variety of instruments (viz, sarangi, tabla, sitar and sarod), pleasing stage set and a cast comprising varied talent imparts authenticity. Well rehearsed characters deliver the dialogues with utmost confidence. Use of Dakhani language adds the local flavor as Tipu and his father (Hyder Ali) were sons of soil who rose to the position sheer by dint of their military capability and strategic foresight of power configuration in the late 18th century world. The play ends on the sad note of Tipu falling a martyr in the battlefield, unable to smell the intrigues around him beforehand. Betrayed by his close confidants, the Fort at Srirangapatnam was stormed by the British soldier who went on a relentless plundering spree in the island capital. There is a touch of credulity in the persona of Tipu as the play draws to an end. Did he really take for real the good news of Nizam and the Peshwa’s offer of help against the British?
Director Zafer Mohiuddin and his team at Kathputliyaan deserves all the praise for their meticulous presentation. Zafer can be contacted at 94480-88247. Karnataka Urdu Academy 90357-78967.