Islamic Voice 0 September, 2017 12:00 am
Capturing the Saga of Transition
The Major Task
Countering a Popular Myth 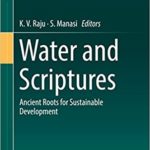 Life on planet earth is primarily and essentially sustained by air, sunlight and water. God has created enough water on the earth for all to use. But it can be and is controlled through various means.

Available, but not Accessible
Not all regions of the earth are endowed with adequate access to fresh water, which is the life and blood of any civilization and key to human progress. About 700 million people inhabiting 43 countries are currently witnessing water crisis. Around 60 million people who move to towns and cities every year are being forced to take shelter in informal settlements, a euphemism for slums. The brunt of the water crisis is suffered by women who spend nearly 200 million hours a day in collecting water from far-off sources. While most of the surface water sources are getting polluted, the ground water sources are being sucked dry due to unscrupulous and unscientific exploitation. Nearly 665,000 people died between 1991 and 2000 due to 2,557 water-related natural disasters (tsunami, floods, cloudburst, cyclones etc).
The Institute for Social and Economic Change (ISEC), Bengaluru, conducted a research study in 2014 to explore scriptural guidance regarding water and its sustainable use in various civilizations. TThis reviewer was also a part of the team and is author of the chapter ‘Water in Islam’ in the present volume, together with late colleague Mr. M. A. K. Tayab a retired civil service officer. The chapters on ‘Water in Hindu Scriptures’ and ‘Perspectives on Water and the Bible’ were authored by Dr. Sudhakar Sharma and Dr. Y. Moses respectively. The outcome is an impressive volume.

Essence of Life
All the three religions explored in the book and their principal scriptures are unanimous that water is a gift of God and that all living beings owe their origin to water. There are references to its being integral to continuance of life on the earth. Rains are portrayed as a sign of Divine blessing, and mankind is warned of Divine curse in the form of withdrawal of water. If water was a rescuer in the case of Prophet Moses (the parting of the sea), it was a destroyer in the case Prophet Noah’s (the deluge that drowned all but few) people due to their rebellious attitude. Its cleansing, healing properties have also been emphasized. Its indispensability to farming and production of food, its capacity to link human civilization through navigation and its aesthetic values too have been described in varying degrees in the Quran, Puranas and Upanishads and the Bible.
In Hinduism, water is one among the pancha bhootas (five basic elements) viz., air, water, fire, earth and ether (the space). These elements are indestructible and can only transform into one another. In Hinduism, everything in nature is equated with the Almighty. God manifests himself through all the creation of the Universe. It is why all living things are described as ‘Devata’ which does not mean God but ‘one who gives’.
Water is broadly found in scriptures as an utter necessity in snaana (bathing), paana (consumption), shoucha (cleansing), chikitsaa (relieving), upachaara (hospitality), krushih (farming), and tarpanam (consoling). Sustainable use of all that nature offers is part of Hinduism. Hindus devised several ways of storing water, such as kunds, vavs or bawdis or bowlis, jhalaras, etc.

Water Devices
Islam emerged in parched and desiccated lands of the Middle East, hence the emphasis on conservation of water sources and laws regarding equitable distribution of water. Water is described as the mother element of all living beings and the very basis of life of a region and civilization. The Prophet’s traditions prohibit wastage of water even if a person is making ablutions on the bank of a river. Muslim civilization witnessed development of devices such as water clocks, water dispensers, musical boats, water lifting devices and the Persian wheel. While the Ottomans in Turkey laid down elaborate legislation for water rights and distribution, the Safvids of Iran built aqueducts or underground water canals (almost 22 lakh kilometres) to take water to human habitations. The Mughals in India developed gardens and used water for both irrigation and aesthetics.
The Bible has 700 references to water. It uses water as one of the symbols for God’s generosity. Water has been attributed with healing and cleansing properties. Having to pay for water is considered a mark of oppression and unjust treatment in Christianity.

Trusteeship vs. Ownership
All of these three great faiths consider man to be trustee or steward of water as of other natural resources and prohibit ownership of its sources as is being conceived and advocated by some global water companies. They emphasize water as a fundamentalist right of every human being rather than a commodity to be traded against a price. They prohibit overexploitation of natural water resources and plead for conservation and augmentation of its supplies for increasing human needs.
Supplied with ample photographs of archival value and footnotes, this book fulfils a longstanding need to develop a religio-historical perspective on water and its relationship with human civilization.