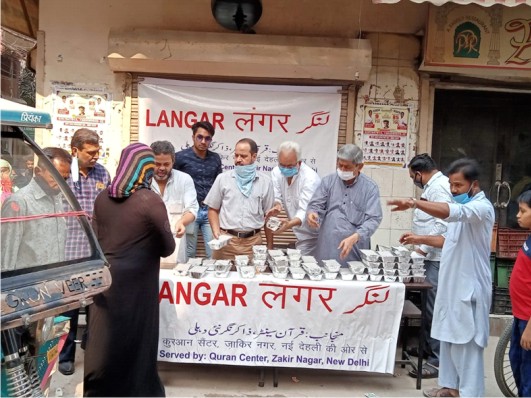 The idea of the Monday Langar emerged while I was studying the Quran, specifically the 107th chapter of the Quran, which says:

Have you seen one who denies the Day of Judgment? Who turns away the orphan, and who does not urge the feeding of the poor? So woe to those who pray but whose hearts are not in their prayer. Those who do things only to be seen by others. Who are uncharitable even over tiny things.

In this chapter, God is telling the reader to motivate others to feed the indigent. Encouraging people to feed the needy is thus an important commandment ordained by God upon us.

This Surah from the Quran inspired me to initiate the Monday Langar.

The second reason was that since my childhood, I have observed that among many Muslims, the meaning of ibadat has been confined to just five times prayers, hajj, zakat, and fasting. But, actually, there are many other essential commandments from the Divine which are also ordained upon us but are not practiced by Muslims, generally speaking. As mentioned above, the Quran tells us that one should motivate people to feed others. Thus, this is also an essential part of ibadat that we should engage in, just like prayers, fasting, and zakat. So, that was basically the idea behind starting the langar program. I consider feeding the needy and poor as part of ibadat in the manner indicated by the Quran.

The purpose of the langar is to highlight that feeding the needy and displaced is an ibadat. It is farz on us, a binding duty. The langar sends out a positive message to others too about their responsibility towards feeding the hungry.

Giving poor people food with your own hands when you are on the street, and other volunteers distributing food packets sensitizes you as a human being. It gives you exposure to a different aspect of human reality when you personally interact with the people who receive the food. It strikes a chord in your heart personally when you relate with them.

We started the langar in August 2020. The langar is held on the main road of Zakir Nagar, in New Delhi, on the turning of the street where our Quran Centre is situated. It is held every Monday at lunchtime in the afternoon. Some volunteers and I together personally serve the food.

We serve vegetarian biryani at the langar because many people who take the food may not eat meat. We kept it vegetarian so that more people can access it—people of different faith backgrounds—and we wish to convey the message that being Muslim does not necessarily mean eating non-vegetarian. Vegetables are also a gift from the Almighty and mercy too.

The paid cook prepares the vegetarian biryani. It is packed in half a kilo aluminum boxes then distributed to the people because we do not have space to feed them at our centre.

We distribute 500 packets of food during the Monday langar. We have small packages for kids too. The people who come for the langar are mainly construction labourers from nearby sites, rickshaw pullers, and maids. They are from different religious and social backgrounds.

The expenses of the langar are met through family funding. While I contribute some money, a significant portion is sent by my son. Two other family members also chip in. We do not collect any donations from other people, and nor do we do ask for any. When we distribute the food, many people come to me and say that they want to contribute money for this. I request them not to donate money but, instead, to start a similar initiative in their street or locality. I tell them that money is not important, but what is important is that they should put in their own effort by distributing the food to the needy with their own hands. I tell them that however small it may be even a few sandwiches they should personally give the food to the needy.

We continued the distribution till the beginning of Ramzan this year and halted it when Ramzan began. God willing, we will restart it again after lockdown and Ramzan concludes.

Through the langar, the message sought to be conveyed is that we must serve people irrespective of religion, community, caste, and creed. We must serve humanity that is the best service.