Islamic Voice 0 July, 2017 12:00 am
Heart of a Mouse
School Equipment and Educational Material for Tiny Tots Nursery Available for Half Cost in Bangalore
Discoveries in China 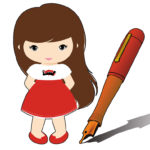 Poppy was a “little” girl”, in grade  seven””little”, because even though she was thirteen, she was very small made and looked hardly eight.
Poppy had many friends, and once a month, on a Sunday, they met up in a lovely place in town called ‘Harmony Cottage’, where they read out poems and shared stories that they had written, made things out of paper and wood and did other such interesting things. This was followed by tea and home-made cake and biscuits”which, of course, the children thoroughly enjoyed!
One Sunday afternoon, ‘Harmony Cottage’ hosted a film. It was about a man who had spent much of his life working for peace in the world. Poppy and her friends loved the film, which was followed by a lively discussion.
After that, when Poppy was getting ready to go home, she bumped into Sim, a friend she hadn’t met for a long time. She was in a hurry, but she wanted to note down Sim’s email id so that she could contact her later. Since she wasn’t carrying a pen, she picked up one that was lying on a table at the reception and scribbled Sim’s email id down on a bit of paper.
“Sorry Sim, I have to go now, but now that I have your id, I hope to mail you tonight, and maybe we can meet tomorrow,” she said as she rushed to the door.
Now, in her hurry and absent-mindedness, Poppy didn’t realise that she had popped the pen in her bag after noting down Sim’s address, instead of returning it to the reception, where she had taken it from. When she reached home and opened her little bag to sort out things, she was shocked to find the pen lying inside!
“Goodness gracious!” Poppy exclaimed to herself. “How naughty of me, picking up someone else’s pen like that! I should have remembered to put it back where I took it from.”
Now, Poppy’s mumma had taught her good manners, and among them was a rule that we shouldn’t take things that don’t belong to us.  Poppy tried to follow what her mumma had taught her, and so she was cross with herself for being so unmindful.
Just then, a thought came into her head. “Go back at once to ‘Harmony Cottage’ Poppy, and return the pen,” the thought said to her. But although that was just what Poppy would have liked to do, it was already dark. So, she decided that she would go to ‘Harmony Cottage’ to return the pen the next morning.
When she woke up after a good night’s sleep, the first thing that Poppy thought of was the pen. Over breakfast, she told her father all about what had happened with the pen and requested him to drive her to ‘Harmony Cottage’ so that she could return it where she had taken it from.
Poppy thought her father might be cross with her for taking someone else’s pen, even by mistake. Maybe, she also thought, he might think that going all the way to ‘Harmony Cottage’ to return a pen wasn’t really a very good idea”that he might say that it really wasn’t that urgent and that they could give back the pen some other day when they happened to pass that way. So, you won’t imagine how happy she was with her father’s reaction: “How very thoughtful of you Poppy! My little child is so well-mannered!” he exclaimed as he gave her a big hug.
Poppy’s father gladly agreed to take her right away to ‘Harmony Cottage’ in the family car.  When they got there, Poppy rushed to the reception and handed the pen to the lady at the desk and apologized for having taken it by mistake.
As you can imagine, the lady was very pleasantly surprised. “That’s so very sweet of you!” she said. “You are really such a well-mannered child!”
“My parents taught me that,” Poppy replied, a little embarrassed.
“Well, then you are very lucky to have such parents!” the lady said.
“And we are very lucky to have a child like Poppy!” beamed Poppy’s father as he and Poppy said good-bye to the lady and made their way out.
As you can imagine, Poppy was very relieved that she had returned the pen where she had taken it from. And she’s promised herself to be more careful if she borrows someone’s pen again!