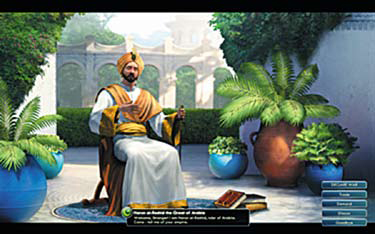 One day Emperor Harun Rashid was holding court when a messenger begged an audience with him. Harun called him aside and
asked him: “What do you wish to convey to me?” The messenger replied: “Your Majesty! I saw it with my own eyes that Jafar, the son of Yahya, dines with one hundred men everyday and fifty soldiers wait upon him to carry out his command. They serve him food
on golden plates covered with velvet clothing.” Harun was amazed to hear about this extravagance. He himself headed a mighty  mpire and he never ate from golden plates. Clearly angry, he summoned his Commander-in-Chief and ordered him to produce Jafar before him immediately. When Jafar was brought before him, Harun said to him: “I am told that you dine with one hundred men every day on golden plates covered with velvet cloth and fifty soldiers wait on you to carry out all your orders.” “But, your Majesty,” said Jafar, “They are beggars, the needy, the wayfarers, and weary travelers who come to me from afar seeking my help to remedy the ills that plague them and I help them with my own money.” “It does not matter to me who they are or what they eat,” said Harun boiling with rage. “Do I have fifty soldiers to wait on me while I dine and eat from food brought to me on golden plates? Whatever I have given to you comes from my treasury. You harbour a secret desire to become the Emperor in my place. And, for this folly you shall go to
prison for a long time.” Jafar fell down on his knees and pleaded for mercy. At length, the Emperor said: “Well, I will pardon you, if you will answer correctly my two questions.” Relieved, Jafar said: “You may ask me as many question as you like, O’ Commander of the
Faithful.” Harun said: “First, you should tell me how long shall I live?” Jafar fell silent at this question. “The next question is you should
tell me what I think, when you answer my first question.” Jafar replied: “Your Majesty! Your questions are truly hard on me; I pray that you grant me time for two weeks.” The emperor granted him two week to come up with answers and warned him that he will be
beheaded and his family will be dispossessed of all the estates, wealth, golden plates and soldiers if he failed to do that. Jafer walked away from the court to have a sleepless night. Early next morning, he started making rounds of Baghdad consulting his friends, scholars and well-wishers for answers to the emperor’s questions. But nobody had the answers. At the end of two weeks, Jafar
prepared himself to appear before the emperor, admit his ignorance and meet the destiny that awaited him. On his last day, Jafar walked on the banks of the River Tigris lost deep in thought, where he recognized a shepherd who was known to him. The shepherd saluted him and Jafar said: “How are you my man? I am glad to see you. How is everyone at your village?” “Absolutely fine sir,” replied the shepherd. “Thanks to you, we all have enough money to meet our needs. Now, we do nothing but laugh all day and half of the
night.” Jafar was taken aback at this answer: “Now, why should you do that?” “For, everyone in my village teases me, my lord, because they believe that I resemble you closely in my looks,” the shepherd replied. “Why, that is true, you do resemble me a lot,” said Jafar.”
What can I do for you?” “Everyone in the empire has heard about the two questions that the emperor has asked you. I have come here to help you,” said the shepherd. Jafar was surprised at what he had to say: “How can you help me? Speak! “Leave it to me, just hand over your gown and the cap, I will go to the emperor disguised like you.” Hesitantly, Jafar asked him: “But do you have answers
for those two questions? If not, then would you be prepared to get executed?” “Be satisfied. I will gladly give up my life for a person like you who is known for his generosity all over the land. The next day, the shepherd dressed up as Jafar appeared before Harun.
The shepherd said: “Your Majesty! I am here as I had promised you.” “Well, tell me how long shall I live?” asked the emperor.
“There is not a living creature on the earth but it is for Allah to provide its sustenance, He knows its dwelling and its final resting place, and you will not die until you have eaten from the last morsel that is decreed for you by Allah and it reaches your stomach before you meet your death.” “You are a wise man, Jafar for committing the Qur’an and the Hadith to your memory,” said Harun, “now, tell me what I am thinking.” “You think that I am Jafar, Your Majesty, whereas, I am only a shepherd who had the good fortune to be the recipient of his generosity, like every poor person in empire has done before me. “Behold!” said the shepherd throwing off his gown,
cap and the golden staff, ‘Now you can see me in my usual dress over which I had worn Jafar’s clothes.” Harun had a hearty laugh and
said: “Go and tell Jafar that I am appointing him as my Royal Treasurer and Prime Minister at this very instant!”Over time, Harun started loving Jafar like a brother. Jafar became the Caliph’s closest confidant, servant, his minister and a constant guest at Harun’s dining table every night. During his term in the office, he ruled the entire Muslim Empire wisely. The empire of Harun grew rich
and strong under his able rule.