Chinku and her friend Dolcy went to the market, where they bought two dozen mud pots and some tins of paint. 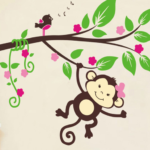 By A Staff Writer
The monkeys were having a wonderful time on the Nolly family’s farm that summer. They would race up the coconut trees and then swing from their fronds, leaping into the air, shrieking in delight. They chewed off the tops of the coconuts, gulped down the delicious juice and then flung the empty shells down, making a great mess all around. They had a lot of fun in the orange grove too, jumping about and munching on the fruits. Sometimes, early in the morning, when everyone in the farm-house was fast asleep, they would make a great noise outside Mr. Nolly’s bedroom window, and when Mr. Nolly woke up to see what the matter was, they would make naughty faces at him!
Taken to the Zoo
As you can imagine, Mr. Nolly was very upset at the way the monkeys were behaving. One day, at the breakfast table, he announced, “These monkeys just have to go! They’re such a nuisance! I think I’ll request the zoo to send someone over to take them away.”
“No Papa! That would be so sad!” Chinku, Mr. Nolly’s little daughter, exclaimed. “The monkeys are really enjoying themselves here. They are so very happy! If they’re taken to the zoo, they’ll be put into little cages, and that would be just terrible.”
“But if we let them be, they’ll eat up all the fruits on the farm, dear,” Mr. Nolly responded.
God’s Creatures Too
“But Papa, they’re God’s creatures too, and they need to eat, just as we do,” Chinku said firmly. “And maybe the monkeys have been on this farm even before we came here, so it’s at least as much their home as it is ours.”
“Chinku’s right, dear,” Mrs. Nolly helpfully added.
“I’ve got a brilliant idea, Papa!” Chinku explained. “Give me a week, and if my plan doesn’t work you can contact the zoo.”
Mr. Nolly agreed to Chinku’s request.
And do you know what Chinku did? She and her friend Dolcy went to the market, where they bought two dozen mud pots and some tins of paint. Then, when they got back to the farm, they set about painting the bottoms of the pots with human faces. After that, they fastened the pots onto wooden poles and stuck them in the ground around the space where the coconut and orange trees grew.
Scaremonkeys
When their work was over, Chinku and Dolcy were very pleased. The ‘scaremonkeys’ (a word the children invented) looked very real, and the two friends were sure they would keep the monkeys off the fruit trees. And that is just what happened! The monkeys thought the pots on the poles were human beings standing on guard and so they kept a long distance from the coconuts and the oranges.
Mr. Nolly was very pleased when he learnt this. He announced that he had changed his mind about contacting the zoo to take the monkeys away. You can imagine how happy Chinku and Dolcy were at that!
“Papa, you must reward us for what we’ve done,” Chinku told her father.
“Yes, of course, dear,” said Mr. Nolly. “Tell me how.”
“Could you please arrange for a dozen coconuts and a bag of oranges to be kept out every morning for the monkeys now that they’re keeping off the fruit trees?” Chinku asked. “Oh that’s such a sweet idea, dear!” Mr. Nolly replied. “We’ll start right away. We shouldn’t delay doing a good deed!”
Saying that, Mr. Nolly took Chinku and Dolcy by the hand and headed off to the fruit trees in order to put together that morning’s breakfast for the monkeys!