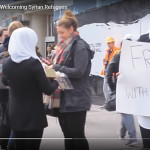 Syrian refugees got a warm welcome from a group of Canadian schoolchildren upon their arrival into the country last month.
The group of students performed “Tala’ al-Badru ‘Alayna” at the Ãcole Secondaire Publique De La Salle in Ottawa, and the video has been viewed on YouTube nearly 850,000 times since it was uploaded. According to CBC News, the song was reportedly sung to the Prophet Muhammad when he sought refuge in the city of Madina.
The performance coincided with Canada’s pledge to accept 25,000 Syrians into the country by February 2016. Newly instated Canadian Prime Minister Justin Trudeau welcomed the first round of refugees with open arms.
Though the timing is ideal, the school’s choir director, Robert Filion, notes that the decision to sing this particular song was made before the country announced its plans to resettle refugees.
“Every year, we try to touch different cultures, and a year ago we started planning to do a Muslim-inspired piece,” Filion told the CBC. “We came up with that tune “¦ and the rest is history.” n
(Extracted from The Huffington Post)