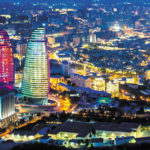 Baku: The World Travel and Tourism Council (WTTC) experts predict that Azerbaijan will generate US$1.834 billion this year, a 6.4 percent increase compared to 2015. Tourism is set to become one of the main economic sectors of Azerbaijan, as new data indicates about one million tourists visited between January and June of 2016, Hotelier Middle East Business Magazine reported.
The research also showed that approximately 600 to 1,000 visitors from Arab countries travel to Azerbaijan every day, mainly from Saudi Arabia, Qatar, Kuwait, Bahrain, Oman and Iraq, spending a minimum of US$ 150-200 daily.
The total number of tourists coming to the country has increased by 30 times this May compared to last year, according to the Culture and Tourism Ministry.
Hospitality options became even more attractive for visitors as a result of the devaluation in the national currency in 2015. The WTTC is an international organization of travel industry executives promoting travel and tourism worldwide.