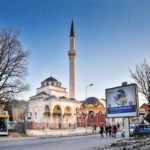 Banja Luka: Thousands of Muslims flocked to Banja Luka, the capital of Bosnia’s Serb region recently for the reopening of a historic mosque destroyed during wartime, a ceremony seen as encouraging religious tolerance among deeply divided communities. Twenty years after the devastating war between its Muslim Bosnians, Orthodox Serbs and Catholic Croats, Bosnia remains split along ethnic lines. The return of Muslim believers to the rebuilt Ferhadija mosque in largely Serb Banja Luka offered hope for change to many. Turkey’s outgoing Prime Minister, Ahmet Davutoglu, whose country contributed to the cost of rebuilding, reopened the mosque amidst a congregation of 10,000 people, stating that the new building sent a message of peace. “Bosnia-Herzegovina, with its Muslims, Catholics, Orthodox and Jews, is one body, one heart. If there is any attempt to split it up, it means that this one heart would be split,” he said.