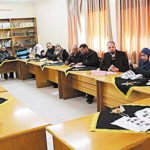 Gaza City: Gaza Strip: In an attempt to teach the Quran to the deaf in the Gaza Strip, the Future Society for Deaf Adults (FSDA) offers religious and awareness courses aimed at interpreting the Quran using sign language. Courses are offered for deaf youth ages 12-18, targeting 500 deaf people in Gaza. The courses are held at the Dar al Quran al Karim WaSunnah, which has 14 branches in the Gaza Strip. Each class consists of 20 students. Mervat Hamdan, 14, is one of the students who enrolled in the courses. She was able to memorize a few verses of the Quran. Hamdan talked to Al-Monitor using sign language; her teacher Mervat Sayam interpreted the conversation. “I am very happy to have memorized a few Quranic verses. “The FSDA offered us a booklet with image interpretations of the Quran in sign language and text in Braille, as I also suffer from impaired vision,” she said. “At first, I had some difficulties in learning the Quranic verses and the hadiths. I did not find much encouragement from the people around me, as they do not know sign language. My mother was the one to encourage me to keep trying and to concentrate on memorization,” she added. “Every word in the Quran has a special sign that helps explain it. As for the process of memorizing, the Quranic verses are written on the blackboard in front of the students and then they are explained,” Sayam told Al-Monitor. Sayam explained, “The courses start off with giving general information about the number of Quranic verses and their parts. The memorizing process is done through tutorial videos on LCD screens, explaining the verse using sign language.” FSDA President Adham Eid told Al-Monitor, “Ten years ago, most of the deaf Palestinians did not know who the Prophet was. However, today things have changed with the religious awareness courses in sign language, which were diligently prepared by Jordan’s Conservation of the Holy Quran Society with the cooperation of the Jordanian Ministry of Awqaf and a professional team of sign language interpreters over the past five years.” According to statistics by the Ministry of Social Affairs in 2015, there are 2,409 people above 18 and 1,243 under 18 who suffer from hearing impairment in the Gaza Strip. The only school in Gaza for the deaf is the Mustafa SadeqRifai Secondary School, which counts 160 students since its opening in February 2011.
(Extracted from www.al-monitor.com)