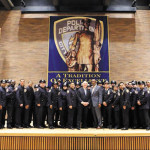 New York: The New York Police Department (NYPD) is working to recruit more Muslims, and is asking for help within the community to better refine outreach aimed at stifling the lure of overseas terror groups. Right now, there are about 800 Muslim uniformed police officers out of about 35,000, according to the NYPD Muslim Officers Society. Of those, only about 20 are higher ranked officials. Lt. Adeel Rana, commanding officer of the community affairs immigration outreach unit, said there has been a slow increase over the past decade, but it has been rapidly changing in the past year and a half. “It’s changing every day; we are getting more and more recruits,” he said. “And as they see people of their own religion in uniform, their eyes brighten.”