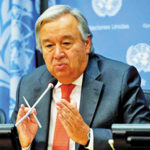 UN chief Antonio Guterres says that Rohingya Muslims were being ethnically cleansed in Myanmar as he called for a halt to a military campaign in Rakhine state. Speaking ahead of a Security Council meeting to discuss the worsening humanitarian crisis there, Guterres described reports of security forces attacking civilians in Rakhine as “disturbing” and “completely unacceptable.””I call on the Myanmar authorities to suspend military activities and violence and uphold the rule of law,” the secretary general said in a press conference.
Asked if he agreed the Rohingya population was being ethnically cleansed, he replied: “When one-third of the Rohingya population has got to flee the country, can you find a better word to describe it?”The crackdown by Myanmar’s army, which followed attacks by Rohingya militants late last month, has prompted around 380,000 to flee across the border into neighboring Bangladesh. Guterres called for authorities “to assure the delivery of vital humanitarian aid,” with thousands of Rohingyas still crossing the border every day.
The 1.1-million strong Rohingya have suffered years of discrimination in Myanmar, where they are denied citizenship even though many have longstanding roots in the country. Guterres said that the Myanmar government should either grant the Rohingya nationality or legal status that would allow them to live a normal life.
(Extracted from www.deccanherald.com)