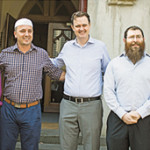 A rabbi, an imam and a Christian priest walk into a synagogue. No, it’s not the start of a joke: it was all part of the Jewish Christian Muslim Association’s (JCMA) Friendship Walk, held some weeks ago in Melbourne, Australia. The event saw leaders and lay people from the three religions spend the afternoon walking from one house of faith to the next in order to learn a little more about each other’s beliefs.
The day began at a church, followed by a synagogue and finally a mosque. At each stop, the faith leaders gave a brief talk about their community and emphasised the relatedness of the three Abrahamic faiths.
The Honourable Robin Scott, Victorian Minister for Multicultural Affairs, was on hand to welcome participants and congratulate them on strengthening the ties that make community diversity so stable in Australia.
“This represents what’s best about our community. When there are challenges, people come together in goodwill, sharing peace, sharing understanding, sharing friendship, but sharing most of all our common humanity,” he said. “We don’t tolerate diversity, we celebrate it.” JCMA president Bishop Philip Huggins said the event highlighted the importance of interfaith networks.
“It points to the common ground, both out of common humanity, but also out of common historical connection and common values of compassion and openness to the stranger, the common belief that we’re all made in the divine image, and the common yearning to serve God as best we can and love our neighbour as ourself,” he said.
Seyfi Seyit, Secretary of the Victorian Islamic Council, said the informal nature of the walk gave everyone the opportunity to learn and engage comfortably. “The ultimate aim is to get here and learn about each other’s faiths, but it’s really just about building those friendships and trust that comes from inviting each other to each other’s homes,” he said. “When you open your doors to people there’s nothing to hide, so it’s about sharing insights of your faith with others.” Around 150 people from across the three faiths took part in the event,.
(Extractedfrom http://www.anglicannews.org/news/2015)