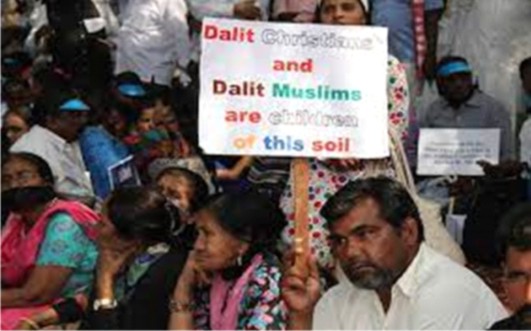 The Ministry of Social Justice and Empowerment has filed a fresh affidavit before the Supreme Court, on giving SC status to Dalit Muslims and Christians in India. The affidavit filed on October 19 says that the government has formed a three-member Commission of Inquiry headed by former Chief Justice of India Justice K.G. Balakrishnan to look into all aspects of the matter.

The “issue is a seminal and historically complex sociological and constitutional question” that requires a “definitive study and extensive consultation with all stakeholders,” the affidavit reads.

In the latest affidavit, the Union government has said the Justice K.G. Balakrishnan Commission will be examining whether this “intelligible differentia” exists and if it concludes so “after field study and holistic determination of the issue”, the classification as it currently exists would be sustainable.

“The Commission appointed by the Central government will establish, one way or the other whether the oppressive severity of backwardness remain the same or not, and till the time the same is established, it cannot be said that the impugned classification is discriminatory,” center’s affidavit reads.

The Centre further said that after conversion to another religion, the only way to establish the backwardness is to see if they are “still suffering from the “same degree of oppressiveness as suffered by Scheduled Castes practicing Hinduism, Sikhism, and Buddhism.”

“It reiterated that there exists an intelligible differentia that these classifications are not a mathematical nicety and the backwardness as pleaded by the instant petitioners is duly taken care of by the respective State governments by providing them benefits under the OBC class.”

“The Dalit Christians and Dalit Muslims are already getting a reservation and other social benefits from being part of Central OBC lists and State OBC lists; and that the criteria for inclusion in the SC list is extremely social and education backwardness due to the practice of untouchability, which is a feature of Hinduism and its branches alone,” says the affidavit.

The affidavit further says if such converts are “arbitrarily given the perks of reservation” in the absence of these principles, “it would cause grave injustice and abuse of the process of law, that would consequently affect the rights of the SCs,” says the affidavit.

The mood of the Center can be judged in the later pages of the affidavit, where it repeats the position taken in November 2019 where it argued that the petitions in the matter were “devoid of merits” and should be dismissed, “without prejudice” to the fact that a commission had already been appointed that has already considered these requests and rejected them.

Syed Ali Mujtaba is a journalist based in Chennai. He can be contacted at syedalimujtaba2007 @gmail.com