The Islamic Declaration on Climate Change calls on countries to phase out greenhouse-gas emissions and switch to 100% renewable energy. With 1.6 billion Muslims worldwide, the collective statement sends a strong signal. 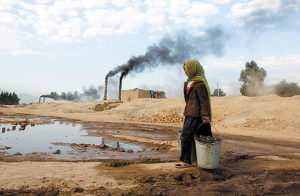 Released during a two-day symposium on Islam and climate change in Istanbul, the declaration explains why Muslims should be responsible activists for the welfare of the planet, and sets out a series of demands to world leaders and the business community.
First, the declaration calls on policymakers responsible for crafting a comprehensive climate agreement to come to “³an equitable and binding conclusion. The agreement should set clear targets and establish ways to monitor them. Additionally, prosperous countries and oil-producing states should phase out their carbon-dioxide emissions no later than the middle of the century; turn away from unethical profit from the environment, and invest in a green economy.
Second, the declaration asks people and leaders from all countries to commit to 100% renewable energy and a zero-emissions strategy as soon as possible, and to recognise that unlimited economic growth is not a viable option. Moreover, adaptation should be a high priority, particularly for the most vulnerable groups. Notably, the business sector is asked to take a more active role to reduce its carbon footprint, commit to 100% renewable energy and zero emissions, shift investments into renewable energy, adopt more sustainable business models, and assist in the divestment from fossil fuels.
Finally, the declaration issues an appeal to all Muslims wherever they may be, that is underpinned by quotes from the Quran. Care for creation is a fundamental part of the Islamic message, the declaration notes, and humans are currently responsible for squandering gifts bestowed by Allah.
The Quranic verse 24:45, tells us how Allah created every living creature from water, and the Hadith instructs us that we are stewards of the Earth:
The Earth is green and beautiful, and Allah has appointed you his stewards over it. The whole Earth has been created a place of worship, pure and clean. Whoever plants a tree and diligently looks after it until it matures and bears fruit is rewarded. If a Muslim plants a tree or sowed a field and humans and beasts and birds eat from it, all of it is love on his part.
The climate in many parts of North Africa and the Middle East could change so drastically in the coming decades that these areas would become hostile to life,” says atmospheric researcher”, says Jos Lelieveld.
If there is one thing North Africa and the Middle East are not short of, it is crises. The wars raging in the Fertile Crescent, in Yemen and Libya have become as depressingly familiar as the dangerous, interminable slow-burn of the Israeli-Palestinian conflict.
Turkey is gradually being transformed into a dictatorship, while Egypt, a country which has already returned to that state, is facing bankruptcy. For decades now, the former “breadbasket” on the Nile has not been producing enough food to feed its rapidly growing population. Now the government can no longer afford to pay for the necessary grain imports.

“Creeping Normalcy”
All of this is more than enough justification for a high level of despondency. Added to these political-social conditions, however, there is another, more subtly insidious blight. Neither dramatic nor sensational, it is a gradual, barely perceptible affliction, so gradual that, in the short-term, the small changes that characterize it, seem normal. The term “creeping normalcy”, has been used by the US scientist, Jared Diamond to describe the inability of people even to recognise the problem.
A closer look at the figures makes it clear that temperatures across North Africa and the Middle East are on the rise, especially in the summer months.
Scientists from the Max Planck Institute for Chemistry have been taking a closer look. Their predictions make for depressing reading. Using computer simulations, they are predicting that there will be an average rise in temperature in the region of around four degrees celsius by mid-century. This would mean the number of extremely hot days, with maximum temperatures of 46 degrees and above, rising five-fold, from 16 at present to 80 days a year. Night-time temperatures would not sink below 30 degrees.
“The climate in many parts of North Africa and the Middle East could change so drastically in the coming decades that these areas would become hostile to life,” says atmospheric researcher, Jos Lelieveld, leader of the study. There is a real danger of these areas becoming “uninhabitable” for many creatures, including humanity.
This horror scenario is the result of man-made global warming. In the 200 or so years that have elapsed since the advent of industrialization, we have released too much carbon dioxide into the air and by doing so, increased the natural greenhouse effect.

Fine Dust Pollution in Saudi Arabia, Iraq and Syria
Even today, the increase in temperatures is causing more dust to be stirred up. According to the Max Planck Institute, fine dust pollution in Saudi Arabia, Iraq and Syria has increased by 70 percent during the last two decades as a result.
ould greenhouse gas emissions continue at present levels (the so-called “business-as-usual-scenario”), scientists are predicting a total of up to 200 extremely hot days a year in the region by the end of the century.
The oil exporting countries, particularly Saudi Arabia, have always tended to drag their feet at climate conferences, putting their economic interests before the need to reduce greenhouse gas emissions. Through an excessive consumption of fossil fuels, their customers in North America, Europe, China and Japan contribute to global warming more than anyone.
Anyone seeking more confirmation need look no further than the withered pistachio plantations in Iran, the decaying groves of date palms near Marrakesh, or the sandstorms in Baghdad. There are warning signs aplenty. Around 550 million people live in the countries of the Middle East and North Africa. Professor Lelieveld and his team believe that “sooner or later, many may have to leave the region.”
(Extracted from qantara.de)