Muslims are still performing poorly with the increasing levels of education. Only 27% and 15% Muslims have completed at least secondary and higher secondary education, respectively. 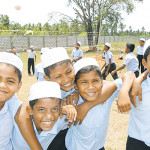 Extreme discontent was palpable when the Modi Government announced Ms. Smirti Irani as its Human Resource Development (HRD) Minister in May 2014. Traditionally, the HRD portfolio is considered most important after Finance, Home, External Affairs and Defence. Irani was certainly well known, but not on account of her credentials as a politician, nor as an educationist. In the last 18 months, Irani has been in the news most of the time, but rarely for having done anything for India’s education.
Smriti Irani announced a New Education Policy Task Force (NEPTF) in February 2015. India’s first Education Policy had been introduced in 1968 based on the recommendations of the Kothari Commission. In 1986, Rajiv Gandhi announced the second policy on education which resulted in Operation Blackboard, a centrally-sponsored programme to supply the bare minimum crucial facilities to all primary schools. In 1992, midday meal scheme was incorporated into it.
Quantitative Expansion
The last two decades have witnessed a sea change in the education sector. The notable success has been in the increase in the proportion of children enrolled in schools. Nearly 95% of India’s children in the 6-14 age group now are enrolled in some primary school. However, beyond this staggering figure, there is not much else to show. Dropout rates are still very high, and much higher among the SC/ST and Muslim populations. University education is yet not available to a large majority with only 3% of adults having a graduate degree. The Gross enrolment ratio itself is among the lowest in the world. The situation vis a vis Muslim education is indeed serious. 81% of the Indian population is literate, of which 86% is from the urban areas and 77% from the rural areas. Literacy level among Muslims is 76%, which is lower than all Hindus (80%), Hindus in general (89%), Hindu OBCs (80%), and other religious groups (89%), but is higher than that of the Hindu SCs/STs (72%). Nearly a gap of 7 and 3 percentage points exists in the levels of literacy among Muslims in the urban (79%) and the rural (74%) areas when compared to the national averages (86% and 77%), respectively. Educational attainment across all the socio-religious communities (SRCs) has improved over time.
Inequalities Galore
Between 2005-06 and 2011-12, percentage of Muslims completing a specified level of education has increased by 2 to 3 percentage points across all the education levels. Among all the SRCs and across all the levels of education, both Muslim OBCs and Hindu SCs/STs have the lowest rate of completion. Similar to the results obtained in the Sachar report, Muslims are still performing poorly with the increasing levels of education. Only 27% and 15% Muslims have completed at least secondary and higher secondary education, respectively. The landmark legislation on education was the Right to Education Act of 2009. However, nothing much has improved. 70% of India’s children study in really poor quality government run schools. In the PISA survey of 2009 for reading, Maths and science abilities, India came second from the bottom of 74 countries, only above Kyrgyzstan. Since then we have refused to participate in the survey. The Annual survey of Education carried out by Pratham continues to show how 7th standard students are unable to read textbooks meant for 2nd standard, and cannot add three digit numbers. What is alarming is that since 2009, government schools have seen a number of students move away to private schools. More than 1.1 crore students have dropped out of state schools while private school enrolment has gone up by 16 crores. Nearly one lakh government schools now have less than 20 students enrolled and run the risk of closure. Among them are poorly run Urdu medium schools across the states where the language is still spoken and studied. On the other hand, because of the strict requirements of the RTE, by 2016, a total of 4,331 private schools have been closed down and 15,000 have been given notice. More than 40 lakh students now are forced to move to very poor quality government schools. It is this condition that the NEP seeks to correct.

Quality is Missing
On the higher education front, the news is not great either. The General Enrolment Ratio (GER) or the ratio of students going to University is still at about 18%. In states like UP, Bihar and Assam, where Muslim populations are high, the GER is less than 5%. Therefore even where the enrolment rates in primary schools have gone up to more than 90%, even for SCs/STs and Muslims, the university enrolment rates haven’t changed much. There has been a tremendous increase in the number of Universities/University level Institutions and Colleges in the last decade. The number of Universities has increased 34 times from 20 in 1950 to 677 in 2014. We now have 45 Central Universities, 318 State Universities, 185 State Private universities, 129 Deemed Universities, 51 Institutions of National Importance (established under Acts of Parliament) under MHRD (IITs – 16, NITs “ 30 and IISERs “ 5) and four Institutions (established under various State legislations). The number of colleges has also registered manifold increase of 74 times with just 500 in 1950 growing to 37,204, as on 31st March, 2013. However none of these figure in the top 100 institutions in the world.

Watch out!
Under these conditions, the TSR Subramanian led task force will assess the status of the present education scenario, review the impact of the 1986 policy and the amended education policy of 1992, assimilate the feedback based on grassroots level consultations and draft a new one keeping in mind the changed social, economic and technological context. The Government of India would like to bring out a National Education Policy to meet the changing dynamics of the population’s requirement with regards to quality education, innovation and research, aiming to make India a knowledge superpower. A new Right to Learn Act will be enacted at the end of the task force’s effort. The worries are that this effort is being guided by a government that has shown a callous attitude towards the entire social sector. The last budget cut more than Rs. 65,000 crores from the health and education sectors. Interference in all leading institutions like the IITs and the IIMs and the Tata Institute of Social Science (TISS) has led to serious criticism from educationists. Institutions such as the ICHR and the Film and Television Institute (FTII) are now led by dubious academics whose only claim to fame is their leanings towards the religious right. When a new policy gets formulated with cultural upheaval in mind and with the underlying purpose of homogenising what is essentially a diverse society then the prospects are scary. The NEP will destroy secular credentials that are the foundations of any modern education system. The critical areas therefore to watch out for are the following:
A. Will the NEP now redefine the status and functioning of Minority institutions? There is already a debate on that minority institutions be defined not on ownership status but on the nature of enrolment.
B. What the NEP has to say on the medium of instruction? Urdu medium schools are grossly neglected by the state. They usually have faculty shortfall and vacancies are not filled for years. Textbooks rarely get printed on time.
C. Will the same PPP philosophy that guides investment in the corporate sector now be pushed to the education sector? This will further diminish the importance of the government run schools and will result in a larger number of schools closing down.
D. Will the NEP have anything to say on the reservation policy? How does the NEP tackle the issue of dropouts? Will it make vocational training compulsory?
E. Why is the NEP being made in such a secretive fashion now? While a large number of consultations have taken place across the country, they are not available for public viewing. The four member committee will go over these and come up with a draft by December end.
F. The refrain that we have been hearing from the government with respect to the NEP is rather suspicious. An integrated, homogenous, holistic view of education that reflects Indian ethos and philosophy is not the modern, progressive and research based education that India needs today.