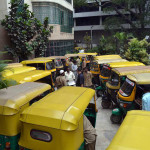 Bengaluru: Haggling with auto drivers over extra fare and tampered meters is part of the routine for many commuters. Though small in number, these autos come with an assurance of untampered meters and promise not to charge one-and-a-half times the meter before 10 pm. They would also not charge any extra money for luggage carried by passengers. This apart, they would even provide a 50 per cent concession on fares for the differently-abled.
Named Salaam Autos, the City-based Salaam Centre has introduced these three-wheelers which have been plying now for a month. The service provider states that customers would get all their belongings safely in case they forgot them in the auto.
Explaining the concept, Syed Hamid Mohsin, founder-chairman, Salaam Centre, said, “We often witness auto drivers unnecessarily asking for extra money, especially in busy locations such as MG Road and Brigade Road. Through Salaam Autos, we hope to change the precedent.”
There are eight such autos plying in the city at present. These autos mostly operate around the Shivaji Nagar, RT Nagar areas. “They mostly ply in Bangalore North,” Mohsin added. He plans to introduce more such autos next year. Mohsin told Deccan Herald that he got the idea ahead of Ramadan this year. “I was making plans to go on a pilgrimage to Makkah. However, I then thought that I could put the money to better use if I could serve people.” Mohsin then utilised the Rs 15 lakh he had set aside for the trip, to facilitate the autos. “Drivers were selected based on their behaviour and consistency,” he said.
The organisation has several programmes that strive for religious harmony. Salaam Autos too has been introduced with the same principle. These autos will carry booklets in seven languages, that seek to dispel myths shrouding Islam. Passengers could browse through the books during their journey.
(www.deccanherald.com)