Slums are babies of the process of urbanization.

Congestion, insanitation, ill-health are not the only features of life in slums. It could be also hazardous from moral point of view. More couples sharing the narrow space, lack of privacy, poor access to water, latrines and bathrooms too could impinge on morality or ethical norms of living. It is in this context that Muslims need to look for organized housing. We carry in brief the statistics pertaining to slums in India. Muslim share among the slum dwelling population being disproportionately high, the community needs to take a comprehensive view of the situation. 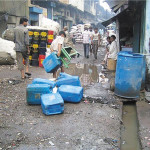 What is a Slum?: Slums have been defined as mainly those residential areas where dwellings are in any respect unfit for human habitation by reasons of dilapidation, overcrowding, faulty arrangements and designs of such buildings, narrowness or faulty arrangement of streets, lack of ventilation, light, sanitation facilities or any combination of these factors which are detrimental to safety, health and morals. (Slum Area Improvement and Clearance Act, 1956)
As per UN Habitat a slum is characterized by lack of durable housing, insufficient living area, lack of access to clean water, inadequate sanitation and insecure tenure.
Slums are said to be the babies of urbanization. These are negative side of the economic growth which pulls people to urban areas which expand in an unplanned manner. Result is unorganized housing, poor access to water, power, education, sanitation and healthcare.
For the first time in Census 2001 slum areas were earmarked across the country, particularly, in cities and towns having population of 50,000 or above in 1991 Census.
Three types of slums have been defined in Census, namely, Notified, Recognized and Identified.
(i) All notified areas in a town or city notified as ‘Slum’ by State, Union territories Administration or Local Government under any Act including a ‘Slum Act’ may be considered as Notified slums
(ii) All areas recognised as ‘Slum’ by State, Union territories Administration or Local Government, Housing and Slum Boards, which may have not been formally notified as slum under any act may be considered as Recognized slums
(iii) A compact area of at least 300 population or about 60-70 households of poorly built congested tenements, in unhygienic environment usually with inadequate infrastructure and lacking in proper sanitary and drinking water facilities. Such areas should be identified personally by the Charge Officer and also inspected by an officer nominated by Directorate of Census Operations. This fact must be duly recorded in the charge register. Such areas may be considered as Identified slums
Total Number of Towns reported slums” 2,613
“¢ Out of 4,041 Statutory Towns in Census 2011 Slums reported from 2,543 Towns (63%). A Statutory town is one that has been declared as an urban area with a population of more than 5,000 and 75% working males having non-farming occupations, and thirdly, a density of 400 persons in one square kilometre.
“¢ Total Slum Enumeration Blocks (SEBs) in Census 2011 is about 1.08 lakh in the country
“¢ Largest number of Slum EBs reported from Maharashtra (21,359)
“¢ Notified Slums 37,072
“¢ Recognised Slums 30,846
“¢ Identified Slums 40,309
Total: 1,08,227 Blocks
137 Lakh Slum Households in India
In terms of household, India had 789 Households (HHs) in 2011. Of these, 137 lakh HHs were slum HHs. (One Household is where people related to each other in some manner live as a family). This means 17% of urban Indian households were in slums.
38 % of the slum households are in 46 Million Plus Cities such as Indore, Pune, Nagpur, Bhopal, Meerut, Vishakhapatnam, Raipur, Hyderabad, Kota, Agra etc.
Top five states accounting for highest slums HHs in comparison to their urban HHs are: Andhra Pradesh 35.7%; Chhattisgarh 31,9%; Madhya Pradesh 28.3%; Odisha 23.1%, West Bengal 21.9%.
Bottom Five states were Chandigarh (9.7%), Gujarat 6.7%, Jharkhand (5.3%), Assam (4.3%), Kerala (1.5%)
Proportion of Slum HHs to total urban HHs in Metro cities: Greater Mumbai 41.3%, Kolkata 29.6%, Chennai 28.5%, Delhi Municipal Corpn., 14.6%, Bengaluru 8.5%.
Possession of Assets
“¢ 44.8% of Slum HHs consisted of one room, 29.5% had two rooms, 12.3% had three rooms, and 4.4% had no exclusive room.
“¢ 14.9% of slum HHs had three members, 25.1% had 4 members, 19.4% had five members, 22.2% had 6 to 8 members and 5.2% had 9 or more members.
“¢ 70.2% of the slum HHs were owned by the occupants and 26.3% were rented.
“¢ 74% of the slum HHs had access to tap water, although 65.3% from treated source and 8.7% from untreated source. 12.7% depended on handpumps.
“¢ 56.7% had the water source within the premises and 45% outside the premises.
“¢ 90.5% had electricity in their homes. 8.5% depended on Kerosene oil lamps.
“¢ 81% had bathing facility within the premises, 19% did not have this within the premises.
“¢ Nearly 40% slum HHs were connected with closed drainage, 44% with open drainage and 18.8% had no drainage facilty.
“¢ 66% of slum HHs had latrine within premises while 34% had no latrine within premises.
“¢ Of the 34% which had no latrine, 15.% depended on public latrines and 19% used open spaces.
“¢ 51.3% of the slum HHs were using LPG for cooking, 25.8% firewood and 14 % kerosene.
“¢ 53.2% of the slum HHs were using banking services, 46.8% were not availing it.
“¢ 69.7% of the slum HHs had TV sets, and 18.7% had transistors. 10.4% had computers and 3.3% had even internet connection.
“¢ 63.3% of the slum HHs had cellphones and 4.4% had landline phone.
“¢ 22% of the slum HHs had two-wheeler automobiles and 3.6 % had four-wheelers.
Source; http://censusindia.gov.in/2011-Documents/On_Slums-2011Final.ppt
Also see: Housing Stock, Amenities and Assets in Slums”Census 2011, by Dr. C. Chandramouli, Registrar General and Census Commissioner, India.