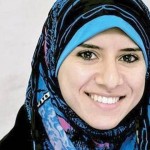 Hamas’ Spokeswoman: Isra Almodallal has been appointed spokeswoman of the Hamas Government which controls Gaza strip. The 23-year old woman who was educated at Grange Technology College in Bradford and later did a course in journalism at Islamic University in Gaza has worked as a reporter for a local station and an English-language satellite channel. She keeps a copy of the holy Quran and a book on American history in her office. She is a divorced mother of a four-year old girl.