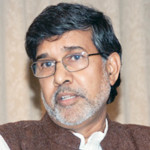 Malala Yusufzai, 17-year old girl from Swat Valley of Pakistan and Kailash Satyarthi from India have been conferred Nobel Peace Prize for the year 2014. These activists who have done a marvelous job in ensuring a safe future for the children in Pakistan and India, need all our appreciation. Their struggle has assumed iconic proportions now that the whole world knows them.
Malala who was shot in the head for bringing girls to school in the Pakhtun dominated Swat Valley of Pakistan. The fundamentalist Taliban had issued death threat against her and she was ultimately attacked by a Taliban assailant. It caused widespread indignation and outrage. Whole Pakistan rose against the diabolical attack against a young girl promoting education among girls. There were special prayers for her. Some organized candle-lit vigils. She was treated in the British hospital and regained an active life.
Awards poured in. She was given the Amnesty International’s Ambassador of Conscience Award, European Parliament’s Sakharov Prize for Freedom of Thought, Sitara e Shujaat, Pakistan’s third highest award, Mother Reressa Memorial Award for Social Justice, Rome Prize for Humanitarian Action, International Campaigner of the Year Award by The Observer of London, and several other awards. She was invited to speak at Harvard University, at the United Nations, met President Obama (ironically, it was the United States which had provided training and weapons to the Talibans to fight against the Soviets), and the Queen Elizabeth of England. The Time magazine listed her among the “100 most influential people in the world” in April 2013. Foreign Policy magazine described her as one among ‘Top 100 Global thinkers’ in November 2012.
Former Cricketer and Pakistan Tehrik e Insaaf chief Imran Khan said Malala reprsents the struggle of girls and women everywhere against tyranny and oppression.
We need more Malalas in our midst in order to take the light of education to every child, specially girl children in order that the Islamic society gets rid of patriarchy which is entrenched so deep into its culture.
Kailash Satyarthi has also emerged as a hero of children’s rights. His Bachpan Bachao Andolan has so far rescued 83,000 children from child labour and financial exploitation of the children. An electrical engineer, he quit teaching in 1980 and plunged into rescuing children from labour sites and organizing schooling for them.
Kailash has argued that child labour perpetuates poverty, unemployment, illiteracy, population growth, and other social problems, and his claims have been supported by several studies. He also established the ‘Rugmark’ as a certification for carpets which have been woven without child labour. Usually, the carpet looms employ children as their nimble fingers said to be very efficient in movement. He created awareness in the world carpet market about this sad reality and saw to it that consumers opted for only those carpets that carried Rugmark.
Kailash deserves all appreciation for his excellent work in restoring childhood to thousands of children in India.