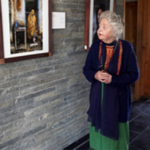 Kabul: Nancy Hatch Dupree, renowned archivist of Afghan artifacts died on September 3 at the age of 89. A historian and writer, she had arrived in Afghanistan in 1962 and devoted several decades to preserve the country’s heritage which suffered damage during the war and rule by the Taliban. Mrs. Dupree wrote five books, and more than 100 articles and pamphlets, on Afghanistan. Her legacy, which she often described as the completion of her husband’s vision, is an academic oasis: the Afghanistan Center, a state-of-the-art research hub that houses more than 100,000 items of primary and secondary sources. Nancy Hatch was born in 1927 in New York state and grew up in Kerala (formerly Travancore state) where her parents were advisors to the Maharaja of Travancore on development affairs. She moved to Kabul (then known as Paris of the East) in 1962 where she met Louis diplomat who was actually working for the CIA, who later became her second husband. She was intensely pained at the blasting of statues of Buddha in Bamiyan during the reign of Taliban. She travelled between Peshawar and Kabul during those tumultuous years of Soviet invasion and Taliban rule and came back to settle there. She set up the Society for the Preservation of Afghanistan’s cultural Heritage which was later converted into the Afghanistan Centre at Kabul University. Here she stored and preserved nearly one lakh items of Afghanistan’s heritage. Her husband died in 1989 and his ashes were buried at Bagh e Bala. Mrs. Dupree too was laid to rest by his side.