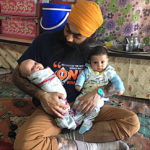 There are no signs of the civil war in Syria ending anytime soon. The crisis in the country has seen millions of its citizens become refugees in neighbouring countries. Even as the crisis continues, many aid groups have been helping people in the war-torn nation. Among them is the Khalsa Aid International, a Sikh charity whose volunteers have been responding to similar crisis across the world. Their humanitarian relief efforts for Syrian refugees are also being lauded.  As per reports, Khalsa Aid has been carrying out similar relief operations in several countries for the past few years, including Lebanon and Turkey.