Efforts to bring in transparency were scuttled from higher-ups in the Ministry. 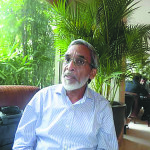 The Waqf Department in Uttar Pradesh”a state with nearly 150,000 waqf properties”is in a total mess. But that may be less of a worry. More worrying aspect is that there is no willingness on the part of the powers that be, to clean up the mess and restore the sanctity they deserve. Encroachments and illegal occupations are rampant. Corrupt mutawallis hands in glove with Waqf officials, rule the roost and are milking the Department dry. No attention has been paid towards modernising the administration. Revenue and offerings at the potential revenue-generating properties are filling the private coffers.
The pathetic picture of the Board was painted by Dr. Akmal Hussain, a scientist who was at the helms of affairs as CEO of the Uttar Pradesh Sunni Central Wakf Board from August 2012 to February 21, 2013. Dr. Hussain, a Scientist at the Zoological Survey of India at Chennai hails from Kannauj in Uttar Pradesh. His services had been hired by the UP Government and he was put in charge of the UP Sunni Central Wakf Board to infuse some dynamism, bring about a turnaround and make the vast number of properties capable of yielding some revenue.

Cleansing the Stables
Not alone that, Dr. Hussain was not allowed to discharge his duties, he was constantly shadowed by the shady elements with patronage from the higher-ups and was made to resign his post under duress. Hussain who was here attending the National Conference on Auqafs in India in the last week of July, told Islamic Voice that he visited Waqf institutions in 26 districts of the State during the six months of his tenure. “Rather than being of any help, the ministerial office was only hindering his whirlwind inspections and trying to sabotage his effort to clean up the Augean’s stables. It seemed the corrupt and incompetent officials had full backing from the top and were under orders to scuttle any attempt to change the status quo and to prevent tumbling of skeletons out into the open”, he lamented.
He said he would visit the important Waqf institutions and properties with due permission of the Waqf Board and intimation to the District authorities with prior notice of his intention to inventorise the Waqf asset. He said a three-tier mechanism was adopted by involving local Waqf volunteers, coordination with district officials and interacting with Waqf Managers or Waqf Mutawallis.

Documenting Irregularities
Hussain documented encroachments and illegal occupation in the 4-acre Old Eidgah in Saharanpur, 6-acre prime land of graveyard in Noida, Meerut Bungalow, shops leased out by the Shahi Masjid in Upperkot area of Aligarh, dargah at Fatehpur Sikri, Atala masjid, Jaunpur with around 100 shops attached, Mahmood Salar Ghazi Dargah of Bahraich etc. “Most of these institutions and properties with prime lands were capable of yielding crores of rupees in rental revenue, but were being misused thoroughly by the custodians (mutawallis)”, he alleged.
Ill-maintained
Hussain informed that while the commercial value of the Waqf assets under Uttar Pradesh Sunni Central Waqf Board may be around Rs. one lakh crore, the revenue collection did not exceed more than Rs. one crore annually. He says, files in the Waqf Board are overwritten, torn and vulnerable to manipulation, page numbers are missing and endowments have no account numbers and audit verification. His pleas to provide computer system went unheeded. The Muslim Musafirkhana on Lucknow’s Charbagh Station with 100 rooms”a half an acre property”does not maintain ledgers.

Coerced into Resigning
He said the higher-ups were clearly scared of his initiative to bring in transparency and his incessant reports to the Government which were highlighting irregularities. “They saw to it that I received no cooperation and was coerced into forwarding my resignation letter”, Hussain observed.
Hussain returned to his position in Chennai and has been recently transferred to the Zoological Survey of India office at Alipore in Kolkata. He will be retiring from the Government service in less than six months.